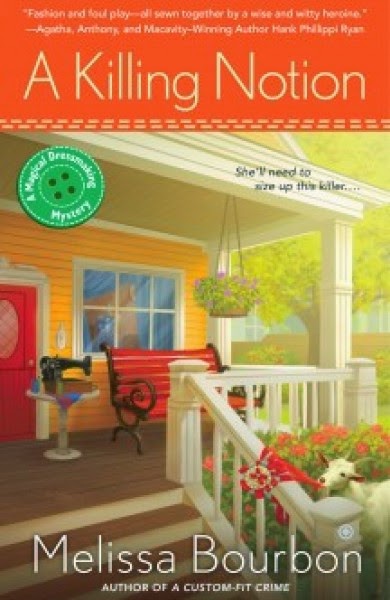 
Harlow Jane Cassidy is swamped with homecoming couture requests. If only she didn’t have to help solve a murder, she might get the gowns off the dress forms….
Harlow is doing everything she can to expand her dressmaking business, Buttons & Bows—without letting clients know about her secret charm. When she has a chance to create homecoming dresses with a local charity and handmade mums for several high school girls—including Gracie, whose father, Will, has mended Harlow’s heart—she is ready to use her magical talents for a great cause.
But when Gracie’s date for the dance is accused of murder, Harlow knows things won’t be back on course until she helps Gracie clear the football player’s name. If Harlow can’t patch up this mess before the big game, her business and her love life might be permanently benched.
INCLUDES SEWING TIPS

My Thoughts:
Any Cozy that involves sewing is one I am drawn to. Add in special, magical skills from her Grandpa Butch Cassidy and you have a even better combination!
So we have Gracie dating Shane, whose father is murdered and Shane is a suspect. Gracie's Dad Will is dating Harlow (don't you just love that name!). Gracie wants Harlow to help clear her boyfriend's name. Harlow has a knack for investigating and getting folks to talk, so she casually heads out to explore more information. Her new Step Brother, the Police sheriff has his eye on her though!
I had just learned about the rage of a huge pin that the girls (and guys) wear at the Homecoming dances in Texas. The "go big' slogan holds true even with these! These are outlandish, huge and colorful. Homecoming was coming up and Harlow as the local dressmaker was helping the girls to design theirs. I thought that was neat to include in the book because many of us don't know anything about it.
The characters were fun and full of Texas love! I really enjoyed Harlow and her care for others including her quacky deceased grandmother who pops up on occasion, as a ghost of course, trying to wreck havoc!

Melissa Bourbon, who sometimes answers to her Latina-by-marriage name, Misa Ramirez, gave up teaching middle and high school kids in northern California to write full-time amid horses and longhorns in north Texas. She is the author of the Magical Dressmaking Mystery series (A Custom-Fit Crime, Deadly Patterns, A Fitting End).

Posted by Jubilee Reviews at 7:21 PM