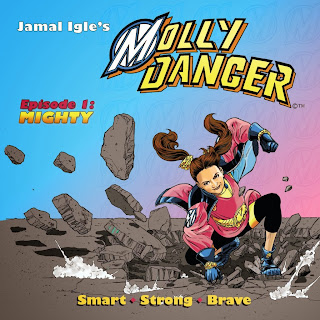 AudioComics Kids presents its newest title adapted from the children’s graphic novel series from industry superstar Jamal Igle (Action Comics, Supergirl, Firestorm, Daredevil/Shi): Molly Danger!
Produced in association with Action Lab Entertainment, and directed by AudioComics co-founder William Dufris (voice of TV's "Bob the Builder"), Molly is “the princess of finesse,” the most powerful ten-year old in the world. She is the protector of Coopersville, New York from the villainous Supermechs, and has legions of devoted fans and more fame than anyone can fathom. But what she really wants more than anything…is a friend. A family. And a real life.

Meanwhile, the forces of evil are converging to rock Molly’s world. For 20 years she has been led to believe that she’s an immortal alien whose family died when their ship crash-landed on Earth, genetically altered by the earth’s atmosphere. She also believes that she is the last of her people. She is wrong–very wrong…

With a house full of boys, super heroes are very constant in our home. It has been wonderful for my daughter to have a Super Hero who is female! She has so enjoyed listening to this adventure of Molly. It is definitely not just for girls either as my boys tuned in to the action packed adventure. This is a very well done audio drama and throws us back to the days of sitting around the radio and listening together as a family. I love these kind of audio productions to invoke imagination in the kids! With no visual stimuli in front of them, they are free to use their own minds to create the scene. I enjoy hearing them describe their thoughts, and even draw out some of the action as it is happening.

Posted by Jubilee Reviews at 12:34 PM