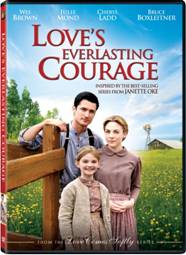 All-New Movie Arrives on DVD May 8th
Inspired by Janette Oke’s Beloved Love Comes Softly Book Series
Just in time for Mother’s Day, Hallmark Channel’s captivating saga returns with another touching film based on the best-selling
Love Comes Softly series by Janette Oke.  Centering on family values in the 19th century, the heartwarming story, LOVE’S EVERLASTING COURAGE, enlightens on DVD May 8 from Twentieth Century Fox Home Entertainment.
Clark Davis (Wes Brown, “True Blood”) struggles to maintain his land and support his family during a long drought.  With a bank loan to repay, his wife, Ellen (Julie Mond, “General Hospital”) takes a job in town as a seamstress, but soon becomes ill with scarlet fever.  Devastated to lose his beloved wife, Clark and his young daughter turn to his parents for support.  Clark must find a way to save his farm and survive Ellen's death without losing the person he loves most: his daughter.
With extraordinary supporting performances from Cheryl Ladd (“Charlie’s Angels”), Bruce Boxleitner (TRON franchise) and Morgan Lily (X-Men: First Class), Love’s Everlasting Courage prebook is April 11.
The popularity of the beloved Loves Comes Softly series continues making LOVE’S EVERLASTING COURAGE the tenth release in the franchise.

We watched this as a family the other night. I remember reading this series by Janette Oke years ago and loving it. The movie was a little slow paced for the kids. I enjoyed it as I always do prairie style shows like this. Not enough action for the boys. Too sad for my daughter who cried and I almost stopped the movie as I was so touched by her emotion. I thought it was good. A good chick flick or one for Mom's to watch for some down time. Positive, Godly influence in this film and that makes it worth it to me!!


I received a copy of this dvd from 20th Century Fox in exchange for an honest review.

Posted by Jubilee Reviews at 2:07 PM