Katrina and Winter, Partners in Courage by Nancy Stewart

Katrina and Winter
Partners in courage
By Nancy Stewart 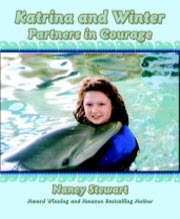 Katrina has a ‘helper leg’ or prosthetic leg due to a birth defect. Katrina spends much time when she is in public feeling anything but ‘normal’ and wishes she didn’t have to see people staring at her.

One day her family on the way to vacation stopped at Clearwater Marine Aquarium, which is a marine animal rescue. One of their stars was Winter, a dolphin who had her tail caught in a crab trap and lost it, leading to her being treated and given a prosthetic tail to help her backbone and allow her to swim.

Katrina instantly felt a bond with Winter, knowing they shared such an important thing. Meeting Winter began to change Katrina’s life. She began to gather courage and joined the Jump rope club despite her helper leg. The camaraderie with Winter gives Katrina a renewed strength. Katrina was even able to do a documentary with Winter!

This is a great teaching picture book for kids. The pictures and story are real life, a biography really of Katrina and Winter. The book starts with Katrina being 8 years old and follows her and Winter’s journey until Katrina is a teenager.

Nancy Stewart is a wonderful writer about endangered and hurt animals. Her stories show her true love of the topic she writes on. This true life story is a great way to show kids that even though someone may have a fake leg, or a missing arm, or even been blind that they are still able to accomplish much. That it isn’t always just people with these things too, that the animal kingdom has animals struggling with the same thing.

Super book about strength and courage to overcome and how friendships help to make that happen.

Guardian Angel Press is the publisher and you can visit them at http://www.guardianangelpublishing.om

You can learn more about Nancy at http://www.nancystewartbooks.com

Posted by Jubilee Reviews at 12:27 PM