Sunya Publishing is a new education company that is releasing two games very soon. We were able to get a sneak peak at Sunya - The Magic and Wonder of Math and Science Multiplying & Dividing.

Sunya, (the u is pronounced oo as in book), is from an the ancient classical language of India called Sanskrit. This language is where we got our original number system. The word Sunya means empty or without quantity and is the word you call out when you are out of cards and declaring your win in the game.

I suggest reading the gamebook through first before getting started. The game itself is actually quite simple to play, but the instructions are a bit confusing. I think it would be good to give an abbreviated version of the instructions in the beginning, and then perhaps going into greater detail. I found them a bit overwhelming, but got the gist of the game to get us started.

The goal of the game is to reinforce multiplication and division facts. You choose when you play whether you will play a game of multiplication or division. Sunya also has a similar game that utilizes addition and subtraction. 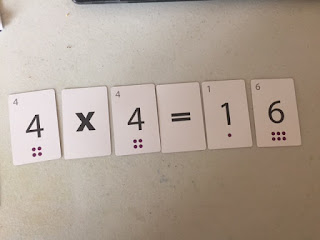 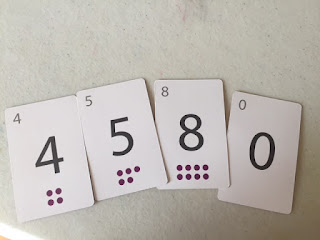 I draw an additional 8 to add to my pile.


I can use these cards to make a new number sentence. 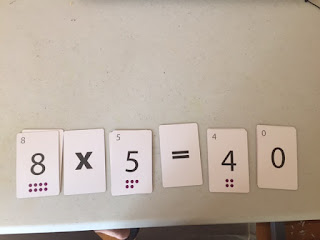 Now my turn is over and play goes to the next player. I am down to 1 card and will draw at the beginning of my next turn.
When I am out of cards I say "Sunya" and is the winner.

There are other rules and exceptions that you can read in the gamebook. The goal is to reinforce the facts of multiplication and division, and this game certainly helps with that. As a homeschooler, we don't get the consistent reinforcement with facts that we should. Games certainly help with that.

There are additional ways to play this game including a solitaire version and a second multiplying and dividing game. We struggled to grasp the first one so didn't get the opportunity to try to change it up. Sticking with the basics was working for us.

So what are the Fact and Riddle Cards for? The winner of the Sunya game draws a card and reads the fact or riddle. These are science and math riddles. The team works together to solve the fact or riddle, just giving a fun ending to the round.

Check out what the Crew thought about the Sunya games by clicking on the banner below.

Posted by Jubilee Reviews at 10:53 AM