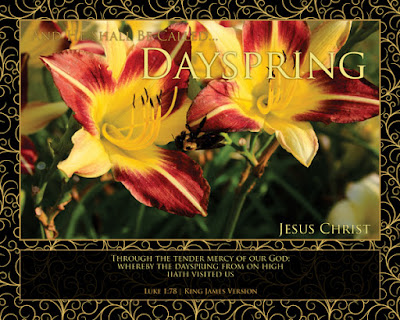 We are studying in Luke on Sunday mornings and this word for Jesus really struck me this week. I have never really given it much thought, having read over it numerous times. Just another example of the Word being alive, and seeking to teach us different things from the Word at different seasons of life. Jesus is that Dayspring.

"Through the tender mercy of our God; whereby the dayspring from on high hath visited us." (Luke 1:78)

I have a new Bible that has Greek and Hebrew translations in it. I am just loving the word study with it. I searched and found this great article from Henry M. Morris, another of my Bibles includes his commentary.

The Dayspring from on High

"Through the tender mercy of our God; whereby the dayspring from on high hath visited us." (Luke 1:78)
This is an unusual, but beautiful, name of the coming Savior given Him by Zacharias when he was "filled with the Holy Ghost, and prophesied" (Luke 1:67). In that same prophecy, Zacharias also called that coming one "the Highest" and "the Lord" who would "give knowledge of salvation unto his people by the remission of their sins" (vv. 76-77). Just six months later, Jesus was born.
The Greek word here translated "dayspring" is so translated only this one time. It refers to the metaphorical spring from which the sun springs forth each day, and so is usually translated simply as "the east." It is interesting that it is used three times in connection with the story of the wise men "from the east" who saw "his star in the east" and then, when they reached Bethlehem once again, "the star, which they saw in the east," led them to the one who was Himself "the dayspring" (Matthew 2:1-2, 9).

There is one other sunrise appropriately presaged here. Many years later the women who had tearfully watched the Lord being crucified and buried, came to His sepulcher to anoint Him with sweet spices "at the rising of the sun" (Mark 16:2) immediately after He had risen from the dead. Here a closely related word is the word translated "rising."

There is another great sunrise coming, as promised in the last chapter of the Old Testament. "But unto you that fear my name shall the Sun of righteousness arise with healing in his wings" (Malachi 4:2). He who is Himself "the light of the world" (John 8:12) will someday even replace the sun in the new Jerusalem. There will never be another sunrise after that, for "there shall be no night there . . . neither light of the sun; for the Lord God giveth them light" (Revelation 22:5). HMM

Email ThisBlogThis!Share to TwitterShare to FacebookShare to Pinterest
Labels: #namesofjesus, Names of God, Names of Jesus