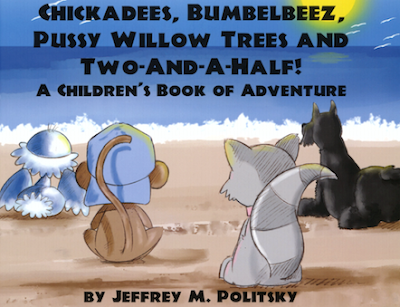 Synopsis:
Children love to explore; it’s intuitive. And they tend to struggle when asked to confine their activities and behaviors to our adult-imposed rules and paths. Chickadees, Bumbelbeez, Pussy-Willow Trees and Two-And-A-Half is a vibrantly and exceptionally well-illustrated adventure book meant to inspire children to follow their urges to explore and to appreciate diversity. The book starts off when “One day a little brown monkey with dazzling olive green eyes, a friendly smile, and a long curly tail asked his father if there was more to the life than just hanging around with other monkeys and eating bananas.” Before long he meets a lovely grey cat and a majestic blue pelican each on their own quests. Together, they explore a foreign island and when their journey takes them into a private swath of land, they befriend a local dog who takes them further than they ever imagined.
Chickadees, Bumbelbeez, Pussy-Willow Trees and Two-And-A-Half emphasizes several significant values, which help us subsist and ultimately thrive: learning through independent exploration, the need for friendship, the importance of respect and tolerance for other cultures, languages, and lifestyle diversity, along with a healthy understanding of the powers of mother nature.

The book is in four parts, and 14 chapters. This is much more than your typical picture book. It is more like a chapter book and picture book combo. This won't be a single night read, and what fun to be able to read it for several nights in a row. Now the very ambitious of course can get through it in one sitting.

The little brown monkey saves for weeks and months to get enough money to embark on a grand adventure. He first travels to Chickadee Island near Honolulu. Cat and Pelican are on separate journeys and they too are headed for Chickadee Island. The little brown monkey meets up with the Cat who speaks fluent Bumbelbeez so the monkey asks the cat to teach him. Silly words like Boingy-Woingy, and Punya-Munya will keep kids giggling as these character continue on their adventures.
In search of a chickadee, the two meet up with Pelican. They continue on finding native foods, and exploring the jungle. Each of the characters has a personality and learn things on the way. They meet other friends including a dog on their way.
I would say that this book is best for the younger set. For maybe ages 3-8. The breaks in action in the chapters give you great places to pause if the child is growing tired of sitting still. Some kids will easily be able to sit longer to hear the entire book. It is a fun adventure to see a cat, monkey, pelican and dog travel around to places together. Kids will love it.


Fifty percent of the proceeds of the sale of each book will be donated equally to research programs dedicated to the study of dementia and memory dysfunction, and to the study of breast cancer.
I love any company that gives back and supports research like these! Dr. Politsky has personal stories in each of these areas and that has led to his support of these particular research projects.

Dr. Jeffrey Politsky grew up in Toronto, Canada. He obtained undergraduate and graduate degrees at the University of Toronto and his medical degree at the University of Western Ontario before moving to Vancouver for his residency training in Neurology. He moved to Boston in the late 1990’s to complete his epilepsy fellowship at Massachusetts General Hospital and has lived in the United States ever since. Today, Dr. and Mrs. Politsky live in New Jersey with their two children and two giant schnauzers. While he has written numerous articles and chapters related to the neurologic sciences, Chickadees, Bumbelbeez, Pussy-Willow Trees and Two-And-A-Half is Dr. Politsky’s first serious non-academic venture

Posted by Jubilee Reviews at 5:12 PM