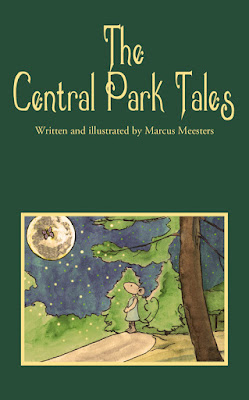 Reminiscent of the classic books of another era and with beautiful illustrations depicting real places throughout the park, Meesters expertly narrates the adventurous tales of the animals who live in Central Park. Containing ten short stories, young readers (and adults, alike!) are introduced to Squirrel, Duck, Frog, Mousekin, and lovable dog brothers, Doctor Beggar and Mister Pup, among others, and follow along as they navigate their marvelous world – a lush, green oasis in the midst of one of the most bustling, famous cities in the world.

10 short stories with 60 illustrations. Central Park Tales is a gorgeous hard back chapter book. Each character has their own charms and quirks. It is so fun to imagine a entirely unique band of animals set up in Central Park where people walk and roam each day. I loved the imagination in each of the stories and how they kept me reading.

Striped Tail Raccoon was one of the first in his neighborhood before the Mouse family moved in. They were so noisy he moved to the basement and they thought he was not longer living there! Quirky and fun, these collaboration of characters was even fun for me to read as an adult.

This book reminds me of others I have read, longer chapter books for older readers where the main character is a mouse, or some other forest creature. This style has always been a draw for my children. Imagining animals having their own little lives is the height of creativity!

This would make an excellent gift, or just an addition to your home library. The illustrations are simple and precious.

Marcus Meesters is the author and illustrator of The Central Park Tales. He was born in the Netherlands and, at the age of 25, he moved to Amsterdam, where he got to know Vondelpark, Amsterdam’s most famous city park. Meesters is a lover of classic children's books, and it was during one of his walks in Vondelpark that he got the idea to write his own children's book about the animals that live there. His first book, The Vondelpark Tales, was born and extremely well received.


Learn more about Meesters and his books at www.thecentralparktales.com and connect on Facebook.


The Central Park Tales can be purchased from iBooks, BookBaby, Amazon, Barnesandnoble.com, Booksamillion.com, and Powell’s as well as through all major booksellers.

Posted by Jubilee Reviews at 6:13 PM

Email ThisBlogThis!Share to TwitterShare to FacebookShare to Pinterest
Labels: a, childrens books, Trilogy