Finding Noah Only in Theaters October 8 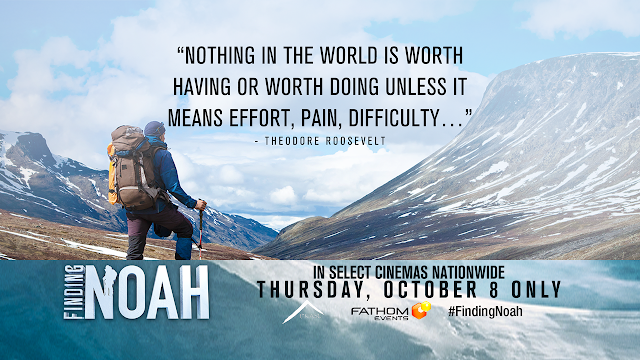 For over 2,000 years, man has been searching for the final resting place of Noah's Ark.  Though there have been many attempts, few have been able to fully explore the one place specifically noted in the Bible: Mount Ararat.  Located in Eastern Turkey, Agri Dagh or "The Painful Mountain" is the tallest mountain in the region and lies in the very center of a centuries old, geo-politically unstable hot spot.  With constant threats of deadly rock slides, hidden crevasses, and glacial ice falls, the Kurdish Rebel held mountain poses great risk to any explorer, let alone those performing a thorough scientific investigation.

Join director/producer Brent Baum and the FINDING NOAH film crew as they follow an expedition of intrepid explorers on a perilous trek up to Mt. Ararat's desolate summit.  There, using state of the art technology and real-time satellite imagery, this team of archeologists, scientists and professional mountaineers will begin a grid work of exploration unlike any before, hoping to finally resolve the age-old question:  did Noah and his Ark actually exist?

Shot in never-before filmed locations in the harshest of conditions, this unprecedented feature-length documentary shows just how far men are willing to go to discover the truth.  Narrated by Academy Award nominee Gary Sinise, FINDING NOAH is more than a quest for answers, it is a testament of the human spirit, where belief and the need for exploration transcend risk and limitation.

I was blessed to watch a preview of Finding Noah! It has so much fantastic information in it. Their are interviews with scholars, authors, rabbi, pastors, climbers, and so much more. You can see some of those interviewed here . I love how they incorporate the broad spectrum and show how many cultures have myths or stories pertaining to a flood. Though we know that it isn't a myth.. it shows up in history so many times.

The film was great for all ages. I liked how they didn't dumb it down, yet it wasn't  over the top scientific that my young children wouldn't understand. Breath taking views of a part of the country few actually ever get to see.

This film is beautifully done and I really hope many of you get out to see it. You can go to the website link below and click on purchase tickets. This will allow you to put in an area code to see where it is playing near you. It is for one day only, and you will not want to miss it!

OFFICIAL WEBSITE where you can find out where it is playing near you!

Posted by Jubilee Reviews at 5:29 PM