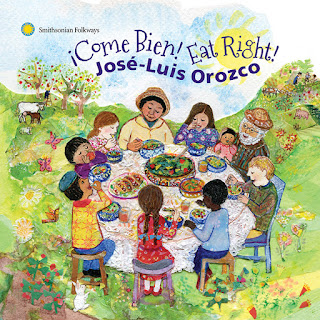 A CD with songs about healthy eating. Songs include The Food on my Plate, Tasty Colors, Juanito's Chicken, Oatmeal, Milk, Snack and more!
This was an interesting CD. Very unique that it is all about foods, and that you can hear each song in Spanish and English!
I enjoyed the milk song. It included rice milk, coconut milk, goat milk and others. Not what you expect from a song titled Milk. I figured it would just be about the good ole' cow and it surprised me.
The first song Thanksgiving, does pay homage to Mother Nature, which I know for some is something they like to know. I didn't find that in any other song that I recognized.

Get a sneak peek of some of the songs HERE

62 minute CD with the first 19 songs being in Spanish, and the 20-38 song being the same songs in English. If you can memorize the song in English, then you would be able to hear the song in Spanish and gain some Spanish language!

Orozco moved from Mexico to the United States at age nineteen, eventually studied sociology at UC Berkeley, receiving a Master’s degree in Multicultural Education at the University of San Francisco. He then committed himself to a new project: playing music for children. He employed his education and experience in cross-cultural communication, to begin a colorful catalog of adolescent-centered learning materials. For these, he won multiple awards such as the 2011 Latino Spirit Award, a Notable Award from the American Library Association, as well as the 1990 Leadership Award from the California Association for Bilingual Education. He was featured performer at the National Association for Education of Young Children conference last fall.


On ¡Come Bien! Eat Right! Orozco has teamed up with a friend and Mexican-American music icon, the GRAMMY-winning Quetzal Flores. Flores, who produced the record, rose to prominence in the early 1990s as the guitar player and namesake of Quetzal, the East Los Angeles-based “Chicano rock” pioneers. In 2013, the group won the Best Latin Rock Album GRAMMY for Imaginaries, released through Smithsonian Folkways Recordings.


Through records such as ¡Come Bien! Eat Right!, José-Luis has continued the journey he began as an eight-year-old singer for the Mexico City Boy’s Choir: “I’ve been able to combine music and education, and that’s what I do all over the country.” Orozco commented, “Every single year, I travel about 125,000 miles; it’s like going around the world five times every year, reaching hundreds of thousands of kids, and families, and teachers.”

Posted by Jubilee Reviews at 2:11 PM