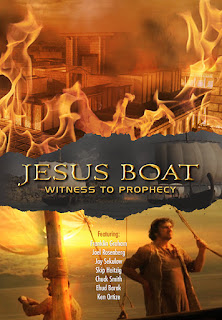 Prophecy and history intersect in the critically acclaimed documentary, The Jesus Boat- Witness to Prophecy.  In “a near perfect film for adults” (MovieReporter.com), The Jesus Boat- Witness to Prophecy chronicles the brutal destruction of Israel in 70 A.D and the miraculous prophecies that foretold Israel’s rebirth nearly 2000 years later.   The history of these events come to life through the discovery of an ancient first century fishing boat identical to the ship mentioned in the gospels and conclusively dated to the time of Jesus.
We really enjoyed this movie. My husband wants to rewatch it even and make index cards of the scripture mentioned. It really was interesting to watch the excavation. The movie shared boat load of information!!
Called a “holy grail of archeology”, the unlikely artifact mirrors the same journey of destruction and resurrection as the country in which it was found.   Sunk and left to rot at the bottom of the Sea of Galilee, astonishingly, the wooden ship survived decomposition in fresh water for almost twenty centuries.  Many scientists of the time felt that the bacteria in the lake would render such a discovery impossible, until four long years of drought exposed the ship to two simple fishermen who helped excavate what is now considered to be the oldest fresh water boat in history.   Less than four decades after Israel had again become a nation, the ship that had been destroyed in the same years Israel was destroyed, stunned the scientific community when it survived the excavation and actually rose to float once more on the Sea of Galilee towards its resting place at a museum built just a few hundred yards from where it had been found.  The Jesus Boat- Witness to Prophecy, produced by Edify Films and Jesus Boat Incorporated, features commentary from Franklin Graham, Joel Rosenberg, Jay Sekulow, Skip Heitzig, Chuck Smith, Ken Ortize and more.    To see the trailer or for more information, go to www.JesusBoatMovie.com.

Synopsis: The astounding prophetic rebirth of Israel is told through the discovery of an ancient and unlikely artifact found under the shores of the Sea of Galilee. A first century fishing boat, identical to the boat Jesus sailed upon with his disciples, was destroyed in the years Israel was destroyed by the Romans, but found 2000 years later in a series of astonishing events that even scientists called a miracle. Mirroring Israel's own story of devastation and survival, the boat from the time of Jesus, would rise against all odds and float upon the Sea of Galilee once more as the oldest surviving freshwater boat in the world. Featuring commentary from some of the great theologians of our day including Franklin Graham, Joel Rosenberg, Jay Sekulow, Skip Heitzig, Chuck Smith and more.
Buy your copy HERE