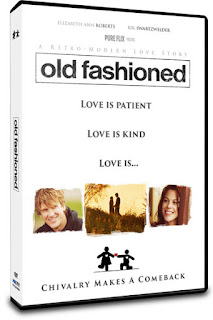 Old Fashioned is a retro-modern love story of chivalry making a comeback.In a time when movies are introducing worldly ways of dating, it is refreshing to have Old Fashioned come on the scene! I want to teach my kids a biblical way of dating and that is so hard with the insurgence of movies that show people going in the opposite direction.

"Living the old fashioned way means being intentional in our relationships.  It thinks in terms of I and Thou (such a great and little used word nowadays!), always considering others above ourselves.  The focus is on the other person - which is the essence of the Golden Rule ("Do to others whatever you would like them to do to you" - Matthew 7:12)" - quote from Ginger Kolbaba, author of The Old Fashioned Way: Reclaiming the Lost Art of Romance.


A romantic-drama, OLD FASHIONED centers on Clay Walsh, a former frat boy who gives up his reckless carousing and now runs an antique shop in a small Midwestern college town. There, he has become notorious for his lofty and outdated theories on love and romance as well as for his devout belief in God. When Amber Hewson, a free-spirited young woman with a restless soul, drifts into the area and rents the apartment above his shop, she finds herself surprisingly drawn to his strong faith and noble ideas, which are new and intriguing to her. And Clay, though he tries to fight and deny it, simply cannot resist being attracted to her spontaneous and passionate embrace of life. Ultimately, Clay must step out from behind his relational theories and Amber must overcome her own fears and deep wounds as the two of them, together, attempt the impossible: an "old-fashioned" and God-honoring courtship in contemporary America.


This movie has a beautiful line up of talented actors/actresses! Starring Elizabeth Ann Roberts who has starred in Ragamuffin and Remember the Daze. Rik Swartzwelder makes his debut performance in Old Fashioned and did an excellent job!

I so appreciated this movie, and it couldn't come at a better time. We need wonderful resources like this to share with our families and other Christians. Chivalry is possible and this movie shows that.
Along with the movie is the novelization of the motion picture with the same title by Rene Gutteridge. That and The Old Fashioned Way by Ginger Kolbaba will be reviewed soon on my blog as well.

Be watching for a stellar giveaway soon!!

Posted by Jubilee Reviews at 4:45 PM