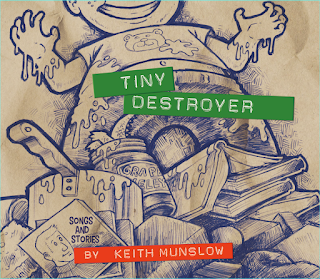 Out of all of the children's CD's we have reviewed, this takes Top Place! We have loved this CD, from my 7 year old playing it repetitively to my teens wanting to put it on their ipods. It is funny, lyrical and a great time for the whole family.

By far their favorite song was "Dad is Takin' a Nap" which they actually played while he was snoozing on the couch, and they sang along to it without him even waking up. The younger ones have made videos using their toys to re-enact it as well.

Their second favorite was "The Last Chicken Wing". Again the little ones made a 'movie video' of the song with their toys acting it out. They also start singing it when we were eating chicken wings.

They have now dubbed the 6 month old baby the "Tiny Destroyer".!

Wonderful CD that I don't even mind them playing in the car over and over. This has been our favorite over several years and has got more play time than any other CD we have reviewed.

There are a couple of stories as well as songs. "Old Joe's Bones" I wasn't sure about at first, thought it might be scary.. let's just say it isn't what you initially think. Great story telling!

Posted by Jubilee Reviews at 2:27 PM