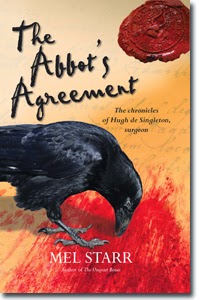 The Abbot's Agreement
A new and disturbing puzzle for the medieval surgeon-turned-sleuth
Master Hugh de Singleton is making his way toward Oxford when he discovers the corpse of a young Benedictine not half a mile from the nearby abbey.
The abbey's novice master confirms the boy's identity; it is John, one of three novices. He had gone missing four days previous, and yet his corpse is fresh. There has been plague in the area, but this was not the cause of death—the lad has been stabbed in the back. To Hugh’s sinking heart, the abbot has a commission for him.
With realistic medical procedures of the period, droll medieval wit, and a consistent underlying sense of Christian compassion, the seventh in the chronicles of Hugh de Singleton will delight medieval history and crime fiction fans alike.
This series is one of my favorite. Hugh de Singleton, bailiff and surgeon is a witty guy. I actually chuckle out loud when I read these books! Mel Starr is well versed in old English and Medieval times, making the story very realistic. You read it and are sent back in time with the characters! There are many characters, with monks and townsfolk and on occasion I would have to back up to see which person was a good guy and which ones weren't. Some of their names were kind of similar. You don't read this book quickly in a speed reading fashion.. you will miss things!

Posted by Jubilee Reviews at 5:44 PM