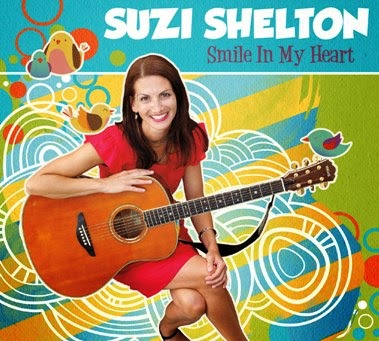 Brooklyn, NY, April 9, 2014 ~ Multi-award-winning Brooklyn-based artist Suzi Shelton will release her first full-length family music album since 2008. ​Smile in My Heart is a feel-good for everybody collection of 12 original and traditional songs. Suzi will release three brand-new music videos and plans a spring-summer concert tour to celebrate the release.
The kid-tested original songs on Smile in My Heart were inspired by Suzi’s family and the families in her life, and the traditional dance tunes feature lively parts from the banjo and fiddle, just right for grabbing a partner and taking to the dance floor. “I tried to include something for everyone in this release,” notes Suzi. “Seeing little faces light up and watching families dancing together brings me so much joy.”  The album was produced by Marc Bazerman, and it features guest vocals by Mike Messer from the Dirty Sock Funtime Band as well as Chicago’s Little Miss Ann.
“Gonna rise it up/gonna share it with you:” the country-pop style sing-along title track “Smile in My Heart” reflects the bright melodies and heartfelt lyrics in Suzi Shelton’s repertoire. Of the three music videos coming soon, the call-and-response song "Go, Fire Truck, Go," (co-written by a 4 year old student from Suzi’s work in local NYC schools) is perhaps the most anthemic and energetic. “The fire truck song always gets the most requests at our live shows,” she says. “Cinnamon Bear” is a wild and happy and free teddy bear, and the subject of another lively and colorful music video. Suzi’s cover of the Jonathan Richman classic “Ice Cream Man” will get kids clamoring for icy treats. Fans will recognize the song “Tomboy in a Princess Dress,” which gained national kudos and radio play when it was released on Suzi’s 2011 EP by the same name.
A Kickstarter campaign will help fund the music videos and production of A Smile in My Heart. Autographed CDs, exclusive merchandise (including a Cinnamon Bear) and private concerts are among the rewards for supporters.

A Fresh Suzi Shelton Hit Debuted with The Rock Father!
Check out the official "Cinnamon Bear" music video and The Rock Father's take on this brand-new song


More about Suzi Shelton
Suzi Shelton is an award-winning songwriter and performer who has been making catchy and meaningful music for families for more than a decade. She has performed at the White House and Symphony Space, and is a favorite among the hip tot set in her home turf of Park Slope, Brooklyn. The mother of two kids, Suzi also works and performs regularly with students at area schools. As the Brooklyn Spectator notes, “When Suzi Shelton takes the stage with her guitar and her band, you know that something special is about to happen.”
For the latest news and tour itinerary, visit www.suzishelton.com.

Posted by Jubilee Reviews at 10:55 AM