Jeremiah Milk lived a life filled with emotional extremes. Amniotic band syndrome—a congenital condition—left his fingers and toes malformed. Ridiculed as a child, he became an adolescent hermit. As an adult, Jeremiah’s wounds healed when he landed a position as a park ranger and married a woman who loved him despite his physical appearance. But fate ripped his life to shreds when his wife and infant son died on the same night in separate calamities. Shortly thereafter, the tides turned once more as an act of Jeremiah’s ostensible benevolence translates into a financial boon. The book on Jeremiah’s life closes without mercy when he’s found murdered at Tripping Falls State Park.

Damon Lassard—Hollydale’s loveable civic leader, amateur sleuth, and Jeremiah’s neighbor—springs into action. He’s obstructed by a prickly lieutenant, but wriggles information unknown to the police from a colorful bevy of suspects. Aided by his best friend Rebecca and his reluctant ally Detective Gerry Sloman, Damon engineers a deep dive into Jeremiah’s past to solve the crime. Along the way, Damon strengthens his relationship with the breathtaking Bethany Krims, cracks a local horticultural mystery, and tries in vain to tame his wickedly sarcastic mother 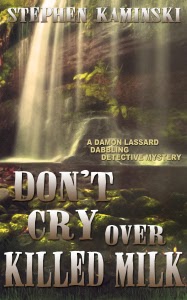 My Thoughts:
Jeremiah Milk had a rough go of it for much of his life. The author introduced me to Amniotic band syndrome, which I had never heard of before. Sure I have seen people with a hand or hands that weren't formed 'perfectly' but I didn't know what caused that at times. I think that with our main character having this deformity, the author is able to address the feelings and emotions from someone who has struggled with bullying, ridicule and simply not feeling like he fits in. That summed up Jeremiah's life. He was a nice person to those around him, but shy. He was currently dating again after his wife and child died. When he shows up dead at the park he works at, there is quite a line up for Damon Lassard to try to decipher the Who Dunnit. Damon isn't with the police force, nor is he a private detective.. he simply has a knack for knowing the right people to talk to.

I really like Damon. He is a humble, down to earth guy who volunteers at the library, helps solve community problems by being the civic leader, and visits his mother to eat dinner with her.
He listens to the problem of the town that the crepe myrtles have bugs and despite the spraying of the flowers, the bugs return. He is all around a great guy! Damon is investigating this problem at the same time he is trying to figure out Jeremiah Milk. Damon is trying to date Bethany Krims, who from the get go I feel isn't right for him. She is much more high strung than he. I am hoping in a future novel he figures out that his best friend Rebecca who knows him well, is the best suited for him!

This is the second novel with Damon Lassard. It was totally a stand alone, I have not read the first one. I didn't miss anything by not doing so. I will however now pick it up and see what his first mystery was about.

The murder was a bit gruesome, so I don't recommend this for teens. Also he did say 'effing' not the actual swear word, but at a time that if you were going to add language, would have been the right time.

The cast of characters keep you guessing, there were several characters but not too many to make it confusing. I read the book straight through and it was a fairly easy read. 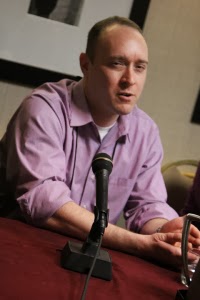 
STEPHEN KAMINSKI is the author of the Damon Lassard Dabbling Detective series published by Cozy Cat Press. The first two cozy mysteries in the series are “It Takes Two to Strangle” (2012) and “Don’t Cry Over Killed Milk” (2013). Stephen is the winner of the 2012 Reader Views Literary Award for the Mid-Atlantic Region.  He’s a graduate of Johns Hopkins University and Harvard Law School, has practiced law for over a decade, and currently serves as Senior Vice President and General Counsel to a national non-profit organization. Stephen is a lifelong lover of all types of mysteries and lives with his wife and daughter in Arlington, Virginia.

Posted by Jubilee Reviews at 11:30 PM