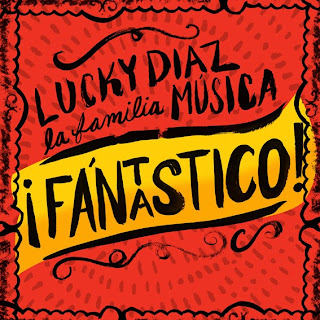 Lucky Diaz and the Family Jam Band, a Los Angeles-based indie-pop band for kids, has won a Latin GRAMMY® award for their Spanish language '¡Fantastico!’ The recordin is available from www.luckydiazmusic.com and other vendors. This is the first time a U.S.-born artist has won the award in the "infantil" or children's album category. The award was presented to the ecstatic duo during the pre-telecast held at the Mandalay Bay Events Center in Las Vegas, NV.


“We’re excited to have been honored by the Latin GRAMMY Academy,” said Lucky Diaz and Alisha Gaddis from the green carpet walk in Las Vegas. “We always strive to make great music for kids and families, and we’re happy that the Latino community is embracing our first Spanish language release. We’re already writing new songs for the next one para los niños.”

¡Fantastico!, released in May, is the first Spanish-language album from the nationally touring Lucky Diaz and the Family Jam Band.  Translating their SiriusXM radio hit ‘Blue Bear’ into ‘Oso Azul’ and re-introducing songs like “Que Dices” and “Gato Astronauta,” Lucky Diaz and the Family Jam Band offers hip, fresh beats for not only Spanish speakers, but to families that yearn to immerse their youngest listeners in dual language right from the start.

The band behind ‘¡Fantastico!’ aims to get families dancing, regardless of what language you speak. “Que Dices” has enjoyed top rotation on SiriusXM Satellite Radio’s Kids Place Live all year, and School Library Journal gave the album a starred review, saying it is “a must-have for every  library collection.”
Stream ¡Fantastico!: http://luckydiazmusic.com/fantasticopreview .

¡Fantastico! Track listing:
1. La Vibora
2. Gato Astronauto
3. Ozo Azul
4. A Bailar
5. Tres Ratones
6. Los Numeros
7. La Rata Vieja
8. ¿Que Dices?
Great way to immerse your young ones in the Spanish language. They won't be able to sing along right away but it won't take them long! This is a fun, fast paced CD that is great while you are studying Spanish speaking countries.

Posted by Jubilee Reviews at 11:52 AM