When Calls the Heart DVD *Review 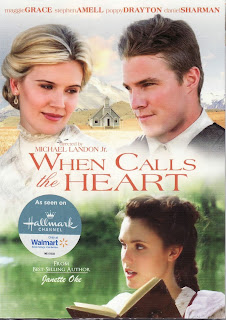 WHEN CALLS THE HEART

Nashville , Tennessee- When Calls the Heart, directed by Michael Landon Jr. and based on the best-selling books by Janette Oke, tells the story of a young high society teacher receiving her first classroom post in a prairie town in the Western Frontier.  Determined to prove to her family that she is brave enough to live on her own,  Elizabeth (Poppy Drayton) struggles with her own fears and doubts until she discovers her late Aunt's diary.  Her aunt (Maggie Grace), also named Elizabeth, had set off on a similar adventure as a teacher into the frontier, where she struggled with prairie life and eventually met and fell in love with a Royal Canadian Mountie (Stephen Amell).  Reading her aunt’s words, the young Elizabeth decides to put her future in God’s hands and embark on her own adventure where she uses the diary as her guide as well as Edward, another Mountie (Daniel Sharman), sworn to see her arrive.

My Thoughts:
I watched this with my kids last night. I really enjoyed the diary aspect of the current Elizabeth and her namesake Aunt, giving us a picture of what happened in the past, and how Elizabeth was going to follow in her Aunt's footsteps. I think her Aunt gave her the motivation to move forward despite the sabotage from her younger sister and Edward try out on her. Elizabeth is from a privileged, upper class family and they do not believe she can handle the rugged out west. Her mother even tries to bribe the Superintendant to keep her close. He tried that himself by awarding her a great position, if she gave him some 'favors'. With her integrity intact she refused his advances and her 'punishment' was to be sent far out west.
During the journey Elizabeth realizes her call, and her love for the students she is about to teach. Through it all, He strengthens her and provides her with the endurance to tackle this call.
I thought it was a great movie. It does end like there could be a sequel?

When Calls the Heart debuted on the Hallmark Channel to more than 3.2 million viewers, making it the No. 1 movie of the week on ad-supported cable.  Distributed by Word Entertainment, The DVD will be available to purchase in Christian Retail November 19th, 2013.

Synopsis
When Calls the Heart is the story of Elizabeth Thatcher, a cultured young school teacher in 1910 who, through the discovery of her aunt's secret diary, finds the courage to leave her big city home to accept a teaching position in a frontier coal mining town.  And in the process, she also finds the potential for love with a handsome Royal Canadian Mountie.
Michael Landon Jr. – Director:  Michael Landon Jr., son of the late television legend Michael Landon, has been in the film business for over 25 years.  With two of the highest rated films in the history of the Hallmark channel, and several top ten releases targeted to the Christian market, Michael has become known for creating heartfelt, inspiring films that connect to the family.  He has developed and/or produced, directed, and written screenplays for Fox, CBS, NBC, Disney, Sony, Lifetime, and others.

Posted by Jubilee Reviews at 11:26 AM