Turbo Racing League app and a Chance to Win a Camaro! 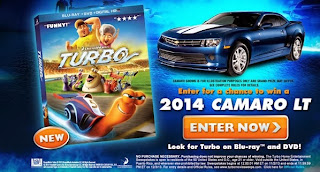 Fox Home Entertainment is launching the Dreamworks animated movie Turbo on Blu-ray/DVD on 11/12 (Digital HD was made available on 10/22) and to celebrate, fans now have a chance to win a brand new 2014 “Blu-ray Blue Metallic” Chevy Camaro. (See the fun in the color's name!)  Starting this week, the top-selling Turbo Racing League app will play host to a four-week tournament where players will have a chance to win a free Digital HD download of Turbo. One lucky grand prize winner will win the 2014 "Blu-ray" Metallic Camaro LT with white racing stripes, valued at $30,000 (picture below).
The Turbo Racing League app has logged more than 30 million downloads worldwide, and is the #1 racing game on all mobile platforms (iOS, Android, Windows Mobile). For Fox Home Entertainment release of Turbo, the app was just updated with all-new features such as:
·         2 brand new film racers — users will now be able to play as Turbo or Whiplash!

(Enter to win in the Turbo App) 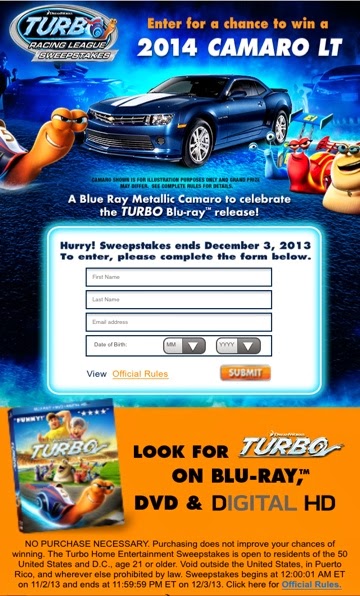 Posted by Jubilee Reviews at 4:59 PM