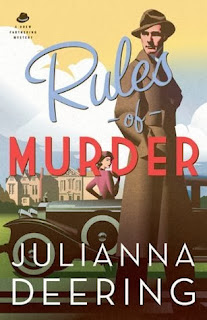 Meet Drew Fartherling in his new 1930's era mystery series. The title led to a few raised eyebrows from my family as I read it! I was in the middle and took it to a basketball game where I had to sell tickets and got asked what I was reading.. oopss. It really isn't what it seems.
Drew Fartherling is son of a deceased wealthy business owner. He comes home to visit for a short time and in that time another member of the company, Mr. Lincoln and his own Mother are killed.
Drew and close friend Nick (the butler's son) are on the case, using advice from an old book series.
They are most definitely novices and the police have warned them to not get in the way. They do however find clues that the police seemed to have missed.

It took a little while to get use to the language in the book. It is placed in 1930's in England and has that flare of old Dick Tracy. I really loved the uniqueness of this book! It had mystery, romance, and a multitude of interesting characters.
It was great to read an old fashioned mystery without all of the DNA testing, and gadgets that the crime shows and movies have today.
This book opened up my vocabulary as well with time period words. I almost had to read the book in a British accent!
Loved this new series and I will most definitely be looking for the next book!

Posted by Jubilee Reviews at 5:40 PM