Phineas and Ferb and good ole Perry are my 5 year olds very favorite characters of all time! Think he likes Perry just a little bit?? 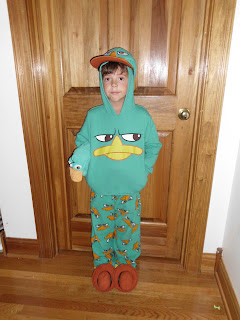 Guess how excited he was to review a Ninteno 3D game all about his favorite characters!! Ecstatic!! 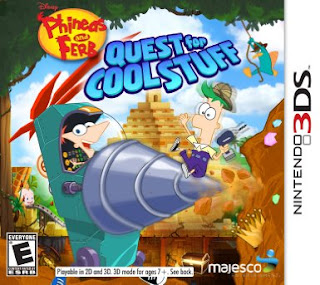 It is recommended that 3D mode be played with ages 7 and up so he played in 2D and still loved it.
He was able to explore ancient temples, underwater caverns and the moon. By far his favorite game of all time! I think this game would be well suited for younger kids as it did have some easier elements, but then there were some times he had to have his 14 year old brother help him out. I think elementary and tweens would be great with it, though everyone would love Perry and his antics!

Join the Creative Stepbrothers on a Treasure Hunting Adventure on Xbox 360, Wii U, Wii, Nintendo 3DS and Nintendo DS


Majesco will also release Agent P Doofendash, a unique Phineas and Ferb smartphone and tablet game, later this fall.  Featuring Agent P and the top agents of the O.W.C.A. (Organization Without a Cool Acronym), our teal-toned hero must save the Tri-State Area once again from the evil Dr. Doofenshmirtz.

“Phineas and Ferb: Quest for Cool Stuff encompasses all the action, humor and imagination inherent in the Disney hit series,” said Jesse Sutton, Chief Executive Officer, Majesco Entertainment.  “We are excited to bring this multiplatform experience to kids and families who will enjoy the outlandish adventures playing as Phineas, Ferb and Agent P.”

Join the clever stepbrothers, Phineas and Ferb, as they travel to out-of-this-world places in their latest invention, the A.T.T. (All-Terrain Transformatron). The A.T.T. is an upgradeable, customizable, super-cool amphibious ride that brings the boys to temples, caverns and even the moon in their hunt for lost loot to display in their backyard Museum of Cool. Phineas and Ferb: Quest for Cool Stuff features many of the fan-favorite characters from the hit TV show, including Perry the Platypus, aka secret Agent P, Candace, Isabella, Buford, Baljeet, and the evil Dr. Doofenshmirtz, who is determined to unleash his latest creation, the “get-rid-of-cool-stuff-inator” on the Tri-State Area.

Posted by Jubilee Reviews at 11:58 AM