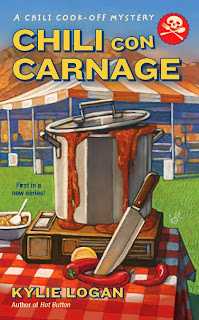 Synopsis
Romance is supposed to be the spice of life. But Maxie Pierce is so done with bad relationships . . . well, almost. She just has to get rid of the latest loser, Roberto. Besides, she has more important things to worry about. Her dad, Texas Jack Pierce, king of the chili cook-off circuit, has been missing for nearly six weeks. In his place, she must team up with her irritating half sister, Sylvia,to promote the family business at the Taos Chili Showdown.
But when Maxie discovers Roberto’s body in a chef’s trailer–only hours after publicly breaking up with him–she suddenly finds she’s the one in the spotlight as the police pepper her with questions. Now this Chili Chick needs to kick up the search to catch the real killer and get back to finding her father.

My Thoughts
Perfect time of year for a Cozy Mystery focused on Chili! Chili Con Carnage is the first in the new series A Chili Cook-Off Mystery. Maxie's Dad has had a string of relationships and ex wives and he is now missing. Maxie and her half sister do not get a long at all and really do seem like opposites in personality. Maxie follows suit with her dad and has a  string of relationships that leave her high and dry and often times robbed. She has sworn off love and men, but can she really? Maxie is a little more provocative than the characters I typically read about, but I think she is coming around. Now her latest beau is found dead.. oops.
There is a little bit of language in the book if you are really strict about that. I like a good cozy mystery enough to skim over those parts. I love the suspense and intrique in the book. I love how cozy mysteries can take place just about anywhere, why not at a chili cookoff with good ole country folk!
The recipe in the book calls for dill pickles in the chili, interesting combo! Not sure if I will try it or not, my kids may have a fit if there are pickles in their chili. It is unique combos like that though that make a good recipe and a great cozy fiction.

About Kylie Logan
Kylie Logan has loved mysteries since she was a kid. Her dad was a Cleveland Police detective and he introduced her to Sherlock Holmes stories and gave her investigating experience when on his days off, they’d pile into the car and hit the streets to look for stolen cars. When he retired from the force, Dad became head of security for the Cleveland Public Library.

Crooks and books! Kylie comes by her love of mysteries honestly. 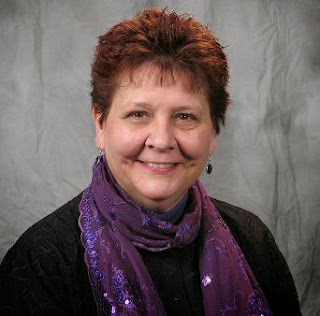 ” was nominated for a RITA award as historical romance of the year by Romance Writers of America. She’s also written contemporary romance (as Connie Lane

) and she writes the popular Pepper Martin Mysteries

(newest book is “Panic Button”), the League of Literary Ladies mysteries (“Mayhem at the Orient Express

“) and now, the Chili Cook-Off mysteries. She can’t pass up an antique shop…there might be buttons in there! She can’t put down a classic book . . . even if she already knows the story. And she can’t say no to a good bowl of chili. Luckily, her husband is the world’s greatest chili maker.
When she’s not writing, she’s usually with her family and their two dogs, Ernie, an adorable Airedale, and Oscar, a rescued Jack Russell who came for a short-term stay and ten years later, is still around. Kylie says that those of you who have ever met/lived with/had dealings with a Russell will certainly understand how knowing him has increased her propensity for murder.
Links:
Webpage: www.kylielogan.com Also, www.caseydaniels.com


Want to win a copy of Chili Con Carnage??
Leave me a message here about your favorite style of chili.
Bean or no beans? Super hot, or mild?
Make sure you leave your name and email to contact you if you win.
Giveaway ends Oct 5th
US only

Posted by Jubilee Reviews at 10:56 AM