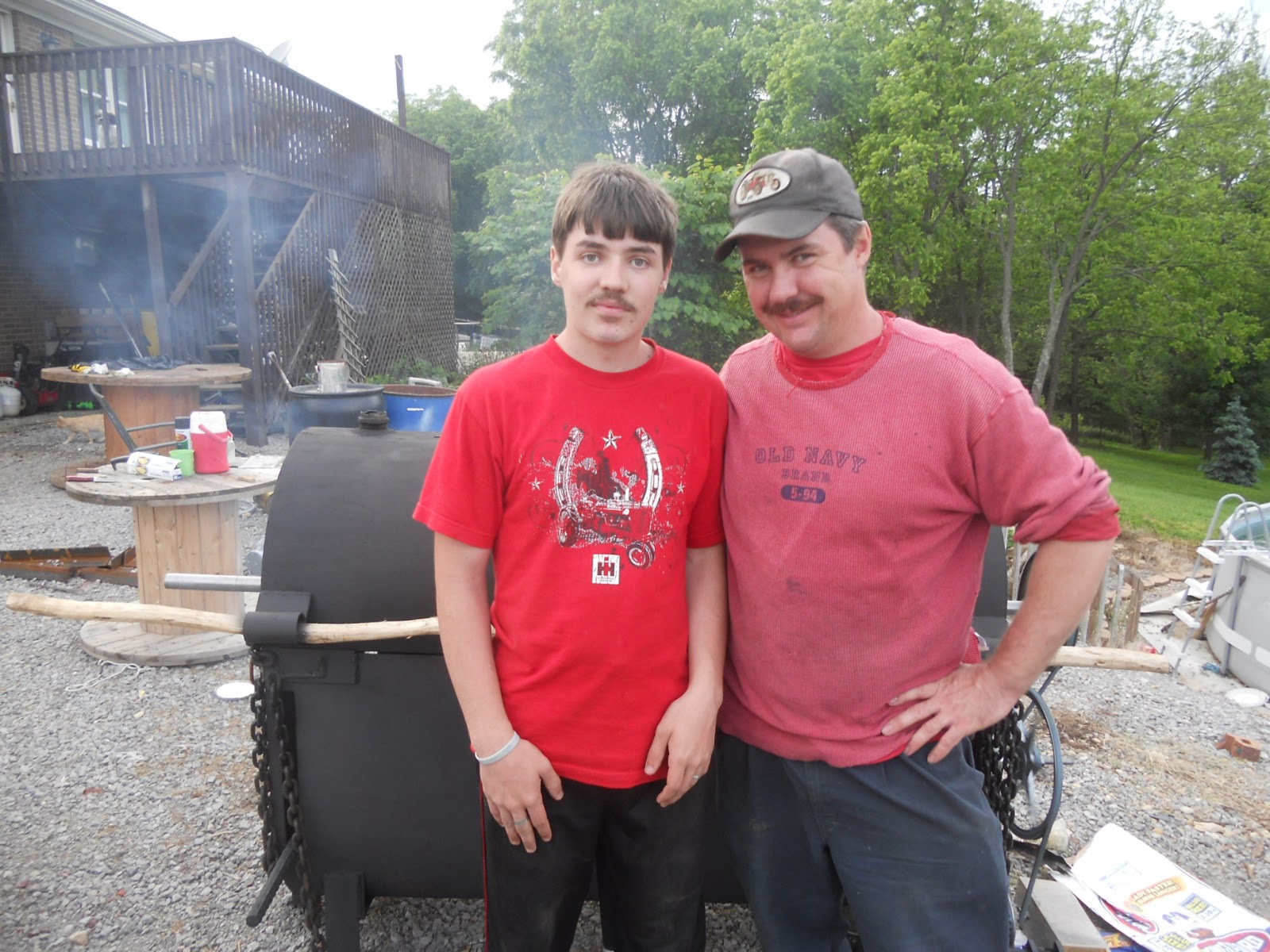 My husband Tim just amazes me and I need to brag on him a bit!
He decided several months ago that we needed to have a pig roast to celebrate our first homeschool graduate. We looked around for places to see if we could rent one, and had zero luck. Tim would not be discouraged, he would just make his own!

He traveled to the farm in OH (which is still for sale by the way :)) and picked up an old fuel tank that was there when we bought the place.
Score : 2 points for the packrat/hoarder
He brought the tank down to KY and started drawing up plans to convert it into a pig roaster. He wanted a rotating spit for a nice, even smoke on the meat. 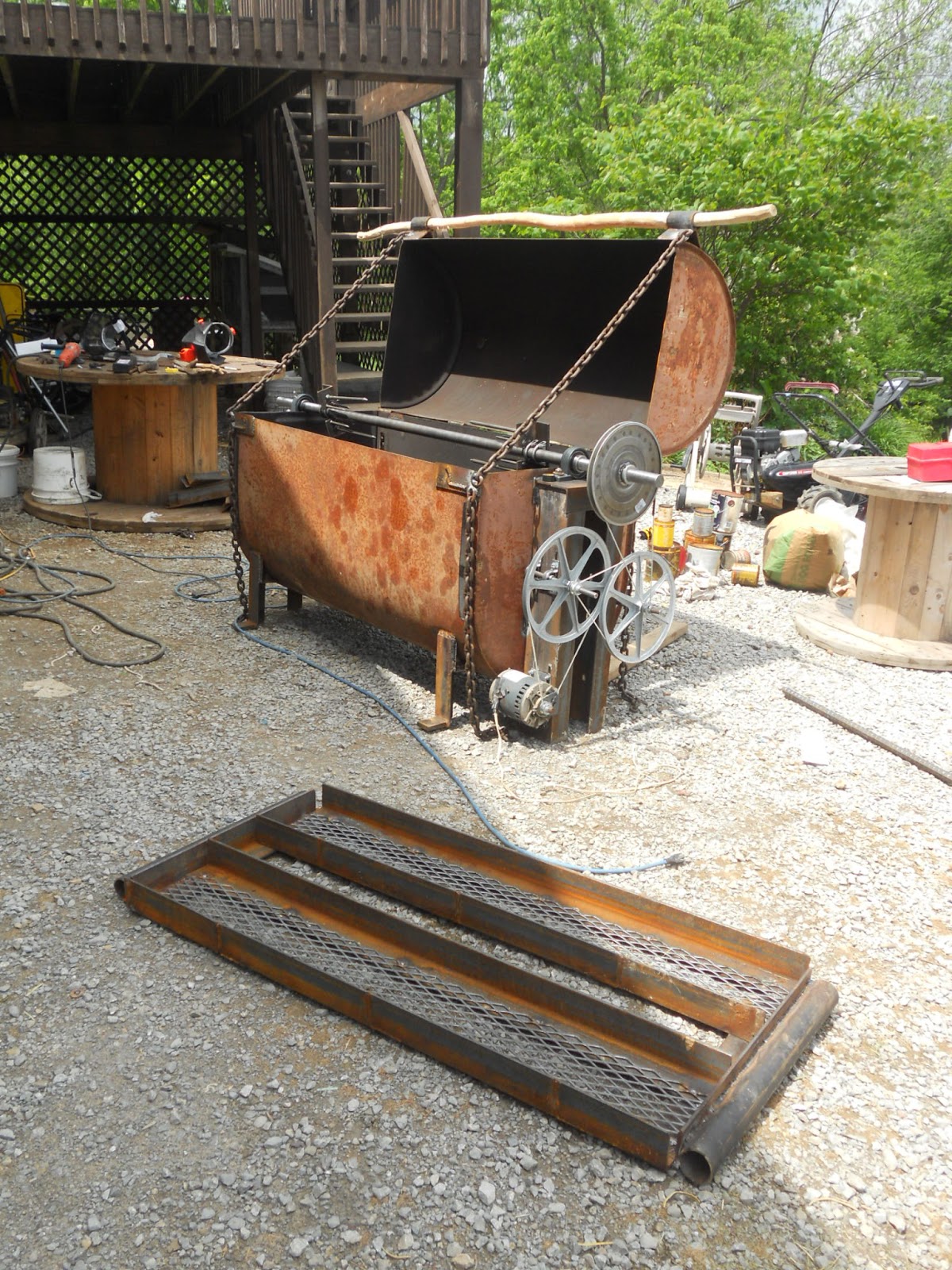 It was labor intensive. The older boys got tired of every spare minute working on the pig roaster, but we had an early June deadline to meet.. for meat!

He scavenged and utilized parts from his stash for probably 75% of the cooker. For the others he check out the best prices and ordered online and locally. The motor he used was an old one he had kept. They worked and worked for several weeks on this project.

Ten days prior to the party he found out where to purchase pigs. Seven days before the party he got up at the crack of dawn to go and purchase two pigs before going to work. We had decided that one would be a trial run for the Saturday before the party. There was much riding on this being successful, and we love meat so we geared up for a very early morning process. Of course the two oldest boys were camping with friends that morning so the work fell to the fourteen and eleven year old. Good training for them I figure. 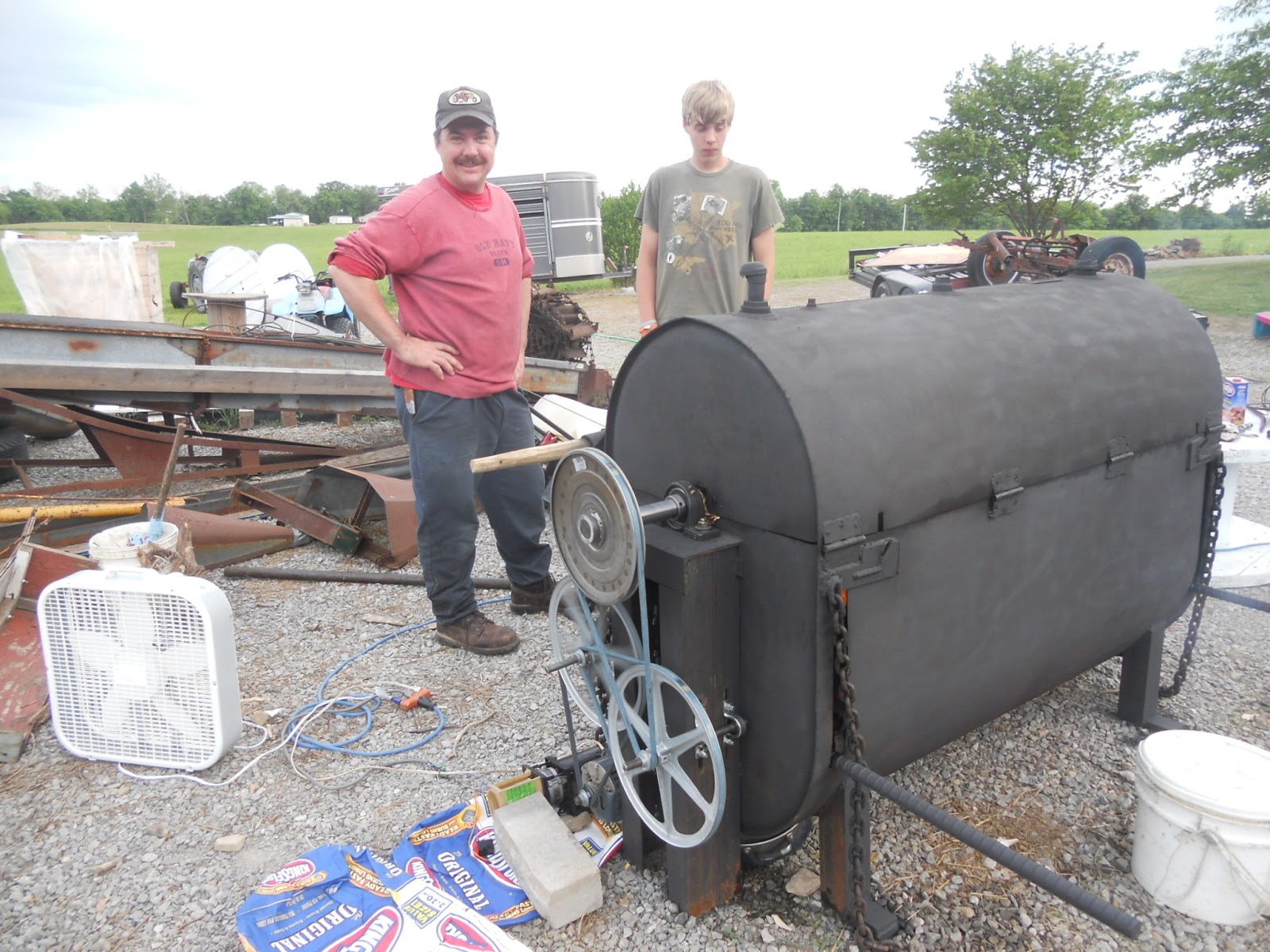 They were troopers and I am so proud of them. The oldest boys were home in time to help get the pick situated on the cooker. 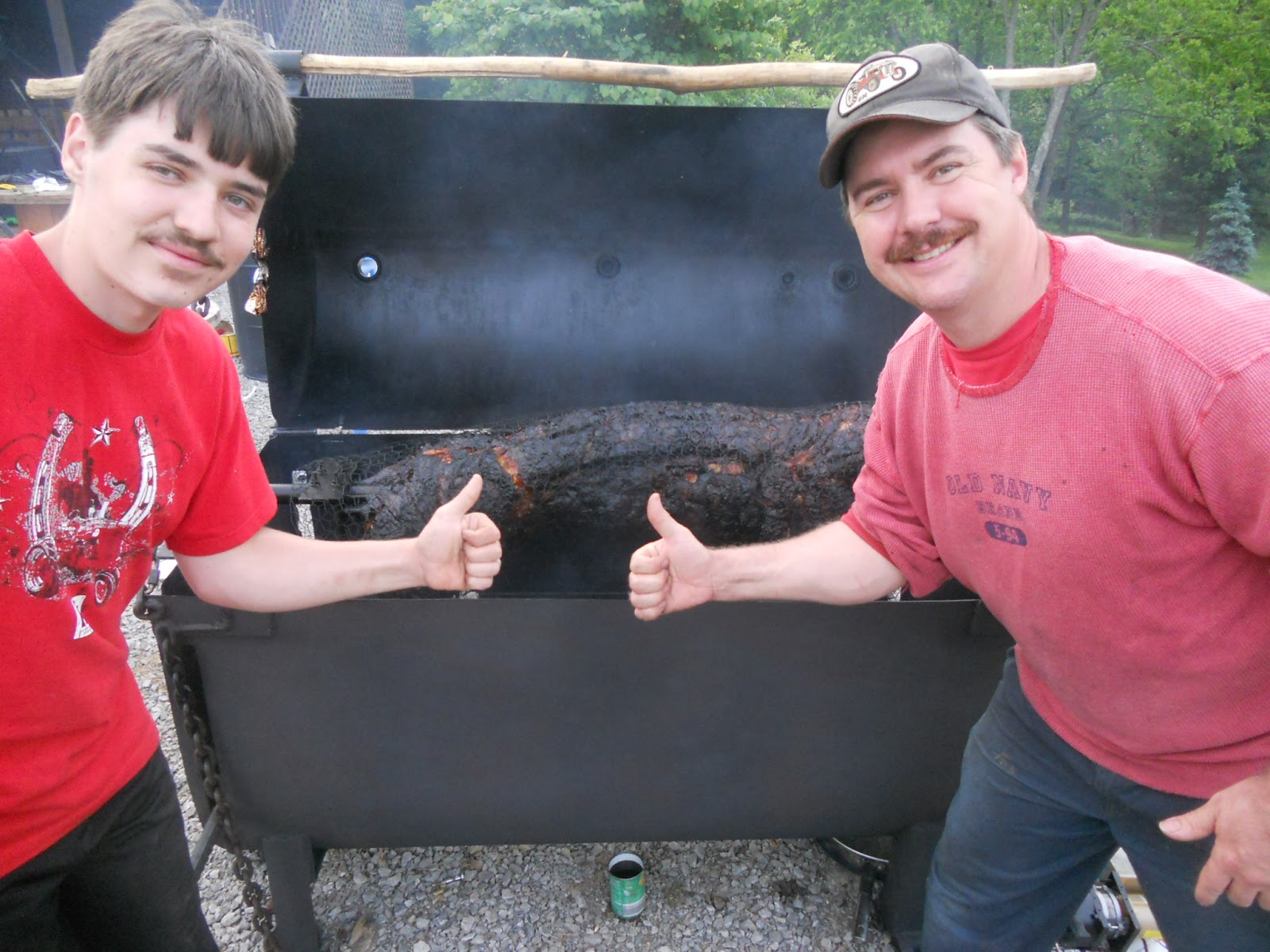 Tim remembers cooking one as a kid and it taking 12 hours so he figured that would be a fairly accurate time. Six hours later the pig was ready to come off the grill. I guess his cooker and the rotation helped it to cook much faster.

We had a feast of all you can eat pork that night for dinner. By simple trial, Tim used charcoal but also put some wood in and wow did that add the smoked flavor we wanted. The boys mentioned never having tasted anything this good in their lives! Now that is a complement to the chef.

Old pros they were set on the day of the party. Got up at 5 am to start working on pig number 2. By the time I rolled around in the morning they were just getting it on the spit. This time Tim's oldest brother was here to help and that was super since the oldest boys had to go with their employer that morning. 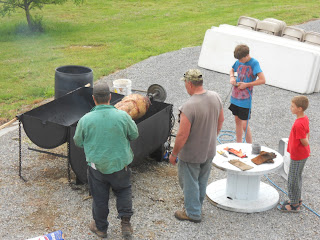 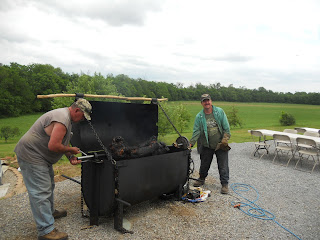 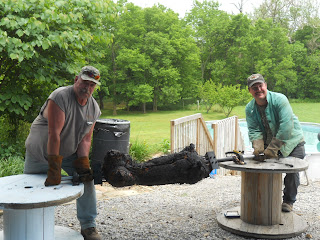 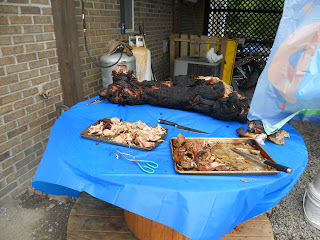 The party started at 3:00, pork was done by 2:30 and pulled off the spit before guests started arriving.

What a wonderful work ethic and sense of determination my husband has! He also made a grill for the top, so we can use it as a charcoal grill to cook other things. We used it for Fathers day chicken and burgers. 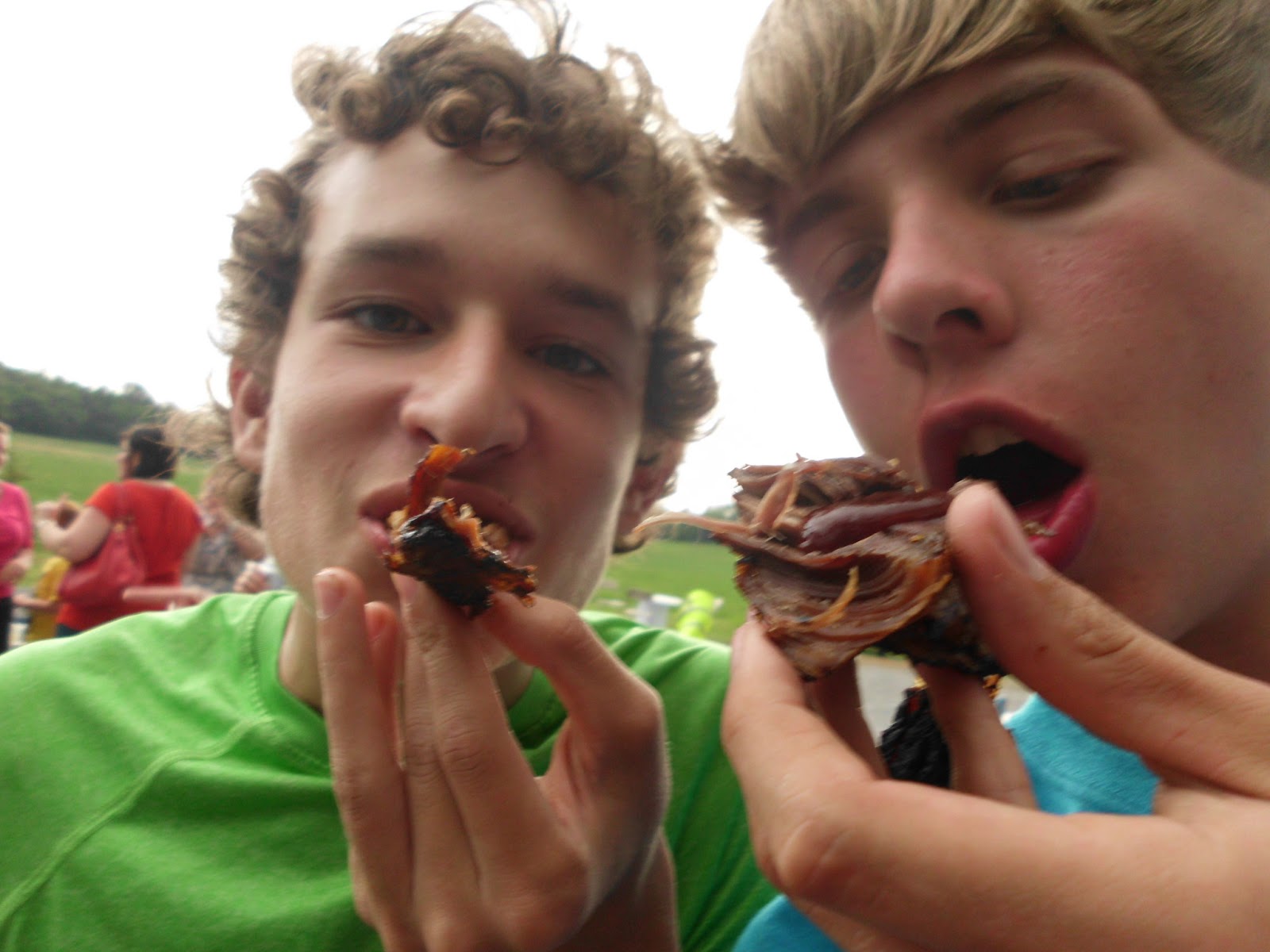 Posted by Jubilee Reviews at 6:20 PM

Email ThisBlogThis!Share to TwitterShare to FacebookShare to Pinterest
Labels: family