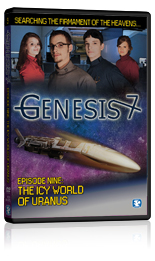 After launching probes through Saturn's incredible winds and affirming that the seventh planet has no core, the Genesis 7 crew sets its course on The Icy World of Uranus. As they struggle to get some shut-eye, Enoch and Priscilla experience homesickness, and Priscilla and Donton share a game of chess and sandwiches beamed into space by the handy Instameal machine at Genesis Command.

As the spaceship approaches the ice giant planet, Donton dreams that he accidentally transfers Capt. Abigail Jennings on board the ship with the Instameal, much to the surprise of the love-struck Enoch, who is toying with asking Abigail to marry him after the mission. Meanwhile, Donton descends in Little G to collect images and data of Uranus, and the crew sits back for their long journey to Neptune.


The graphics and story line seem to be getting better with each additional show according to my 14 year old. He mentioned that he really enjoyed the holographic chess game and the instameal machine that made it seem more space aged.
Facts he learned about Uranus is that it had 500 mph winds. It consists of mostly helium and is very cold. Uranus lays on its side with a horizontal ring around it.
The images shown in the show were drawings.

If you want to know further details on Uranus you will need to dig deeper. This show just wets your whistle for the seventh planet with a few details thrown in. This series is great for introducing your students to the planets in a light hearted, child friendly way. The show runs for 22 minutes which is a great time for a school day or unit study on the planets.

Posted by Jubilee Reviews at 5:51 PM