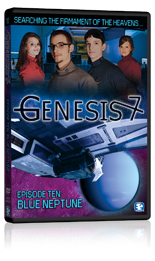 Episode ten picks up with the Crew of Genesis as they head toward the blue planet, Neptune.
The main story focuses on them crashing on Neptune's biggest moon, Triton. Triton is very unstable with constant rupture of nitrogen. Neptune itself has no core and is a gas giant.

Back at Genesis command the team is finding out that someone is sabatoging them and stealing documents.
This series takes a look at a trio of space explorers as they journey through space for a year to emphasize their mission of bringing glory to God beyond the firmament of the heavens. This series is very basic in facts, but adds in some drama to keep the viewers attention. It is not a documentary on the planet, but a look as some young kids try to prove to the world, how awesome God is! This is a great series to go along with a study on space and the planets. Each one is approx 22 minutes in length, just right to add to a special time in your homeschool day.

Be sure to check out this movie from Bridgestone Multimedia Group as well as a fantastic selection of Family Friendly movies! Your one stop movie shop.

Posted by Jubilee Reviews at 6:11 PM