Berenstain Bears' Do Not Fear, God is Near *Review 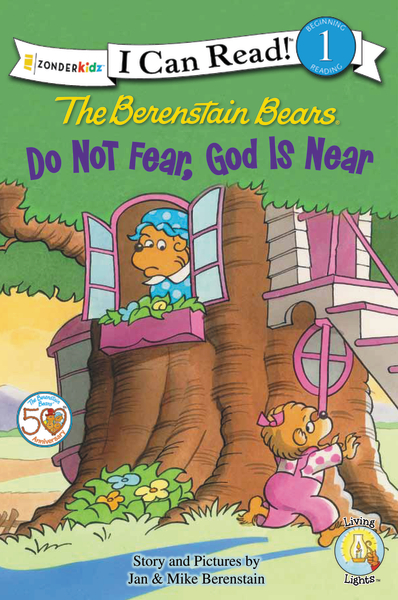 THE BERENSTAIN BEARS’ DO NOT FEAR, GOD IS NEAR (Zonderkidz; $3.99; April 2013), Sister Bear learns how to trust God. While her fears of dogs and lightning have subsided as she’s gotten older, Sister Bear’s aversion to spooky shadows remains. And Brother Bear teases her relentlessly about it. Mama and Papa Bear remind her that with God always close by, there is no reason to fret. When Sister Bear realizes this, she becomes so confident that she even tries to taunt her brother!

This is a beginning reader level 1. It is based on Psalm 34:4 "I sought the Lord, and He answered me; he delivered me from my fears"
We all have fears, but I realize sometimes young kids have more than we realize. How many times a week do you think I get a child waking me up with 'bad dreams' or 'I can't sleep'. It isn't as often as it was with really young ones, but at least once a week.
When Sister Bear was younger she was afraid of a lot of things like bugs, birds, thunder. As she gets older she realized trusting in God would help to take away those fears. Even with that knowledge Sister was still afraid of shadows.
Brother teased Sister though Mama tried to tame him down. Brothers are just that way some time!

Check out my giveaway for this and one other Berenstain Bear Easy Reader HERE!

Posted by Jubilee Reviews at 7:23 PM