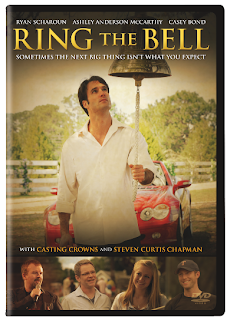 About Ring the Bell:
Ring The Bell shares the story of a slick, big city sports agent Rob Decker who seems to have it all. But on his latest mission to sign a high school baseball superstar, Rob becomes stranded in a small town where the simplicity of life—and the faith of the people—stand in stark contrast to his own fast-paced, win-at-all-costs mindset. Torn between these two worlds, will Rob have the courage to let faith transform his life? This heartwarming story of redemption is sure to entertain and inspire the whole family.

Ring The Bell features a host of well-known Christian music artists, such as Mark Hall along with his band Casting Crowns, Steven Curtis Chapman, and Matthew West, all who play a role in this inspirational drama. Several former and current Major League Baseball all-stars are also featured in the film: ESPN analysts John Kruk and Rick Sutcliffe (a former Cy Young Award winner), along with Ben Zobrist.
This family-friendly movie was produced by Mark Miller, Beach Street Records' founder and Casting Crowns’ producer. Miller, who is also the lead singer and founder of country music group Sawyer Brown, co-wrote the script with Thomas Weber and Weber directed the production.

The Heart of "Ring the Bell"

On Set with Casting Crowns

The Artists and Music of "Ring The Bell"


Enter to win a copy of Ring the Bell!
US only
Ends May 12th

Posted by Jubilee Reviews at 1:07 PM