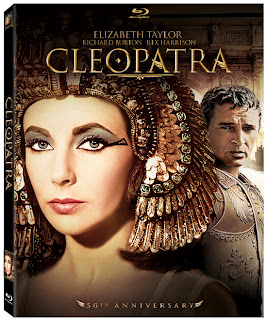 
Meticulously Restored Film to Premiere at the 2013 Cannes Film Festival


Limited Engagement In More Than 200 Theaters Beginning May 22


LOS ANGELES, CA (May 6, 2013) – Twentieth Century Fox Home Entertainment, in partnership with Bulgari, is pleased to announce a global celebration fit for a queen to commemorate CLEOPATRA’s 50th anniversary and pay tribute to the enduring legacy of its stars, Elizabeth Taylor and Richard Burton. Directed by Academy Award® winner Joseph L. Mankiewicz, the historical epic shot on 70mm film took home four Academy Awards and was the highest grossing films of 1963 earning more than $57 million in its initial release. CLEOPATRA infamously cost an unprecedented $42 million to make (equivalent to over $300 million today) and was racked with scandal as the onscreen love affair between Cleopatra (Taylor) and Mark Antony (Burton) spilled over into real life during the three-year production in Rome. Burton celebrated his great love for Ms. Taylor with exquisite gifts from Bulgari.


Twentieth Century Fox has meticulously restored the 243-minute original theatrical version of CLEOPATRA to commemorate its 50th anniversary. The new digitally restored transfer will receive a world premiere as an official selection of Cannes Classics at the 2013 Cannes Film Festival on May 21 in the Sixtieth Anniversary Theater.


The Cannes premiere hosted by Academy Award nominee Jessica Chastain will also include Kate Burton, daughter of Richard Burton, and Chris Wilding, son of Elizabeth Taylor, as well as other representatives from the film and families.


A red carpet reception will follow where Bulgari will display several of Elizabeth Taylor’s most treasured pieces from her personal jewelry collection, which are not for sale, and were reacquired at her highly publicized Christie’s auction — many of them for world-record-breaking prices – after she passed away in 2011. The display includes a Bulgari handheld mirror made of gold and turquoise, a present to Ms. Taylor during the filming of CLEOPATRA that can be seen in the movie, as well as original costumes from the film, on loan from Cinecittà Studios in Rome.


In honor of the 50th anniversary of CLEOPATRA, Bulgari will also unveil an exclusive jewelry piece inspired by Ms. Taylor and the film that will be auctioned off in 2013 with proceeds benefitting The Elizabeth Taylor AIDS Foundation (ETAF). Additionally, Twentieth Century Fox Home Entertainment has made a donation to ETAF in support of her courageous life’s work in raising awareness and providing care for those affected by HIV/AIDS around the world. Fans can help continue Elizabeth Taylor’s legacy and join the fight against HIV/AIDS by making their own personal contribution at www.ETAF.org.


“My mother would have been thrilled about this spectacular celebration of CLEOPATRA'S 50th anniversary by Fox and Bulgari,” said Chris Wilding. “She would have been especially pleased that they are also supporting The Elizabeth Taylor AIDS Foundation, a cause she cared about deeply."


Following the premiere at Cannes, Twentieth Century Fox will re-release CLEOPATRA with a limited theatrical engagement in more than 200 theaters around the world beginning May 22. The film will play in the Cinemark Classic Film Series among other theater chains. In select markets, Bulgari will host receptions in-store in advance of the screenings. Additional details and screening locations to be announced at a later date.


On May 28, CLEOPATRA will make its Blu-ray debut in a 2-Disc 50th Anniversary Edition artfully packaged with a full-color book featuring rare images that provides a fascinating behind-the-scenes look at the making of this legendary film. The Blu-ray is packed with dazzling bonus materials featuring never-before-seen exclusive content including Cleopatra’s lost footage, commentary from Chris Mankiewicz, Tom Mankiewicz, Martin Landau and Jack Brodsky, behind-the-scenes featurettes, and more. Additionally, fans can watch footage from the film’s original theatrical premieres in both New York and Los Angeles.


Bulgari will celebrate CLEOPATRA’S 50 Years of Iconic Style with an exclusive BVLGARI Special Edition Blu-ray that includes an all-new booklet featuring rarely seen photos that tells the fascinating story of these cinematic icons and their fabled connection to Bulgari’s extraordinary jewelry. These exclusive Blu-rays are not for sale but will be made available promotionally for Bulgari customers around the globe.


"CLEOPATRA exemplifies movie making on an epic scale," said Mary Daily, President and Chief Marketing Officer, Worldwide Marketing, Twentieth Century Fox Home Entertainment. "Elizabeth Taylor is a cultural icon who has inspired generations through her work, notable charitable efforts and her legacy, which is as strong as ever. As witnessed by our exceptional partnership with Bulgari, CLEOPATRA is as relevant today across fashion, beauty trends, culture and Hollywood as it was fifty years ago. With the support of the Elizabeth Taylor Trust and Bulgari, we are honored to commemorate this iconic film¹s 50th anniversary with a year-long celebration that includes premiering the film in its original theatrical glory at Cannes and for everyone to cherish forever on Blu-ray."


The CLEOPATRA 50th anniversary publicity campaign was launched March 1 with a posthumous star ceremony for Richard Burton on the Hollywood Walk of Fame. Burton’s star was placed next to Elizabeth Taylor’s, further cementing one of the greatest love stories in Hollywood history.


In 51 BC, Cleopatra became queen of the Egyptian Empire: the wealthiest and most revered kingdom the world has ever known. More than 2,000 years later Twentieth Century Fox Studios set out to tell her epic story in what would become, at the time, the most ambitious and lavish moviemaking endeavor in Hollywood history. Elizabeth Taylor signed a one million dollar contract to play the title role of Cleopatra, becoming the first female star to command such a sum for one picture. Elaborate sets and costumes, production delays and the relocation of principal filming from London to Rome added to the skyrocketing budget. A very public love affair between Taylor and Burton meant that there was as much romance and intrigue off-screen as on-screen. The film remains one of the grandest cinematic spectacles of all time and is an integral part of Twentieth Century Fox’s legacy. 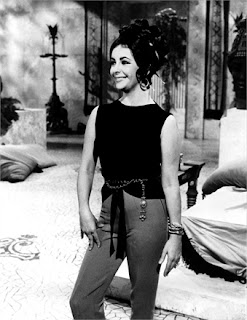 Posted by Jubilee Reviews at 1:44 PM