That Old Flame of Mine by JJ Cook *Review 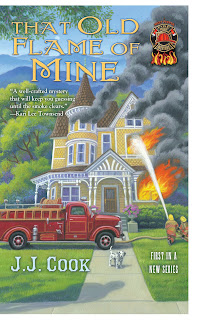 Set in the Great Smoky Mountains of Tennessee, J. J. Cook’s thrilling new mystery series features Fire Chief Stella Griffin, who solves crime with the help of her predecessor, who just happens to be a ghost…NO MATCH FOR MURDERAfter knocking the lights out of her boyfriend when she catches him cheating on her, Chicago fire fighter Stella Griffin hops on her Harley and heads for Sweet Pepper, Tennessee, where she ends up becoming the small town’s fire chief. When her dear friend Tory Lambert dies after her gingerbread-style house is set ablaze, Stella suspects arson and foul play.

As Stella investigates, she gets help from a most unlikely source—the ghost of Eric Gamlyn, Sweet Pepper’s old fire chief. And if that isn’t enough to rattle her, attractive police officer John Trump seems to have taken an interest in her. But Stella’s got to stay focused if she hopes to smoke out a killer before her own life is extinguished.


My Thoughts
Stella is one tough gal! She is headed to a small little town of Sweet Pepper to help organize a Volunteer Fire Station crew. They haven't had one in years, since the old chief Chief Eric died. The town takes to Stella so readily, leaving her treats and supporting her, Tory being one of the biggest advocates. When Tory is found in a house fire, Stella seeks to investigate what is going on as it appears Tory was killed prior to the fire. If only Stella could think clearly when she is home in the cabin. A voice keeps talking to her, and moving things around. Stella does not believe in ghosts, though the entire town says the house of old Fire Chief Eric is haunted by his ghost. Is it?
I am not a big reader of ghost stories. I don't believe in ghosts, but I do love a good cozy mystery. I have found I win run into ghosts in them and I am ok with that. This was a fun read. I loved the small town feel to it. I also loved how it was set in a fire house for the most part. The characters were likeable and I can't wait to revisit the town in book 2!

Author J.J. Cook is really the husband and wife writing team of Jim and Joyce Lavene, who also write as Ellie Grant and as themselves.

The couple writes award-winning, bestselling mystery fiction. They have written and published more than 60 novels for Harlequin, Berkley, Amazon and Gallery Books, along with hundreds of non-fiction articles for national and regional publications.

They live in rural North Carolina with their family. For more on the couple and their writing, visit them at www.joyceandjimlavene.com.


Pick up a copy of the book from Amazon HERE

Posted by Jubilee Reviews at 6:00 AM