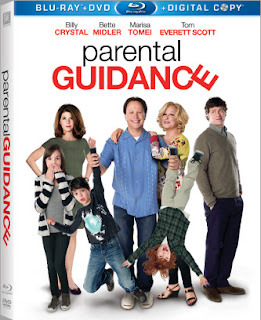 Our Thoughts:
We sat and watched this as a family last night, and within the first 5 minutes of the show every single one of us from age 5 to 40 was laughing! That is the sign of a great movie! Billy Crystal and Bette Midler together are a hoot, and they were able to utilize their comedy for all of us! 5 star movie for sure. Now sometimes Billy and Bette can be a little 'mature' for kids, I have always loved their comedy as an adult. They did a fantastic job in this PG movie however and for the most part the jokes were clean.

Marisa Tomei plays Alice, only child to Artie and Diane. Alice's husband is being given an award for his 'Smart House, full of technology that can basically run itself. Alice calls her parents to see if they can watch the kids while she goes with her husband, though Alice doesn't trust them to even let them watch the kids. She hoovers over them, correcting everything they are doing with the kids. Very into positive reinforcement, extra activities outside the home, organic foods.. all totally foreign to Diane and Artie!

The comedy while Artie and Diane try to adjust to Alice's lifestyle for the kids sake, yet are way too laid back to be put into a box like this. They inch their way into the grandkids lives, by introducing their own lifestyles.. the one that Alice grew up with.


Billy Crystal, Bette Midler and Marisa Tomei prove that laughter is relative in this hilarious comedy that’s fun for the whole family!


Old-school grandparents Artie (Crystal) and Diane (Midler) get more than they bargained for when they get stuck babysitting their type-A daughter’s (Tomei) overprotected kids. But things go from hectic to hysterical when Artie realizes the kids are running the house with their newfangled technology. By playing by his own rules, which include sugary snacks, old fashioned games and tough love, Artie manages to outsmart the kids and achieve the impossible- bring the family closer together!

About Walden Media
Walden Media specializes in entertainment for the whole family. Past award-winning films include: “The Chronicles of Narnia” series, “Journey to the Center of the Earth,” “Nim’s Island,” “Charlotte’s Web” and the Sundance Audience Prize Winning documentary “Waiting for ‘Superman.’” Latest films include the Christmas family comedy “Parental Guidance.”

Posted by Jubilee Reviews at 10:12 AM