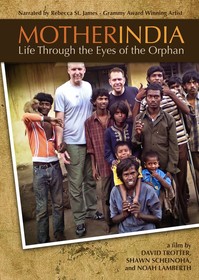 Mother India: Life Through the Eyes of the Orphan

This 49 minute documentary looks at the lives of 25 abandoned and orphaned children living on the streets of India. Narrated by Christian recording artist Rebecca St. James.
Very eye opening and compassionate!

Winner of “Best Short Documentary” at the 2012 San Diego Christian Film Festival, Mother India is a compelling documentary that chronicles the adventure of 25 courageous orphans living as a family along the railway in Tenali, India. Mother India brings to light the struggles faced daily by over 31 million orphans in India and the challenge of rescuing them from a life of begging and addiction.

Mother India, is the work of first-time filmmakers David Trotter and Shawn Scheinoha.  “India is growing in both population and industry, but few people know that there are over 31 million orphans in this nation,” commented Trotter (Executive Producer, Director). “Each of these young lives is much more than a statistic. Every one of them has a name, a face and a story.” Scheinoha (Executive Producer) added, “We’re not out to just tell a tragic story. We’re focused on raising awareness and changing lives.”


Two free books to anyone who pre-orders the DVD on Amazon - http://bit.ly/motherindiaoffer

Enter to win a copy of this amazing film!
US only
Ends May 6

Posted by Jubilee Reviews at 10:22 AM