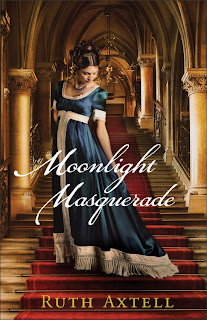 About the Book;
In this new Regency Romance, Ruth Axtell deftly creates a world where black and white burst into a confusion of colors and no one is who they seem.  Axtell’s expert storytelling and attention to historical detail bring the Regency era alive with  intrigue and romance.

Lady Celine Wexham seems the model British subject. French by birth but enjoying life in 1813 as a widowed English countess, she is in the unique position of being able to help those in need--or to spy for the notorious Napoleon Bonaparte. When Rees Phillips of the British Foreign Office is sent to pose as the countess's butler and discover where her true loyalties lie, he is confident he will uncover the truth. But the longer he is in her fashionable townhouse in London's West End, the more his staunch loyalty to the Crown begins to waver as he falls under Lady Wexham's spell.

My Thoughts:
I love these regency era books, the idea of castles and beautiful estates with overflowing flower gardens. These are rich in description and I love feeling like I am transported back in time. Lady Celine is a very likeable character. She seems so out of place in charge, much more likeable than we picture Lady's being. Her marriage to the Earl was one of convenience, he almost three times her age. She had love once, kept from her as the young soldier was considered 'beneath her'. She wonders about this so called butler of hers, feeling something isn't quite right. He is too gentlemanly and knowledgeable. When she looks in his eyes she blushes. How can she be falling for her temporary butler?

I absolutely loved Lady Celina, she was not yet under the saving power of Christ, but not too far out of reach that the lessons from Rees would reach her. I loved how she didn't hold her rank and stature over people. Rees also was a dynamic character that I wanted to learn more about as he began to share a little here and there of his back ground.

I did struggle a little with the history aspect. The British versus French conflict that was going on in the book. I felt like I should have known a little more about it before reading the book, finding myself confused at times... not wanting to delve into the history of it, but instead wanting to find out what happened with the romance part:)  Someone who loves regency era books, and really gets into the history portion will absolutely love this novel.
The Author;
Ruth Axtell is the author of thirteen novels, including Wild Rose, one of Booklist's Top Ten in Christian Fiction. Currently a resident of Downeast Maine, Axtell has lived in the Canary Islands, Miami, and the Netherlands.

Available March 2013 at your favorite bookseller from Revell, a division of Baker Publishing Group.

I received a copy of this book for free as a Revell book reviewer, all opinions expressed are my own.

Posted by Jubilee Reviews at 1:50 PM