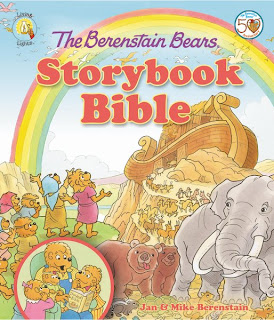 My 8 year old daughter has taken to this book. She reads it to me every evening before bed and in the morning for devotions. I love that she found one that she can read almost all of the words in, and the pictures help her to figure out the words she may not know. The basic stories from the Bible, but in Berenstain Bear style! It is so fun to see the Bible characters in bear form. The storybook is true to the Bible, and that is important to me. Sometimes being able to read about the stories first, gives the youngster more knowledge to tackle the bigger words in the Bible.

I love to give bibles as gifts for Easter. This would make a perfect one for a little one in your life. This nice hardback edition will be with them for years to come, and create memories about some of the greatest moments in history.

Children will cozy up with their parents and siblings as Mama, Papa, Brother, Sister, and Honey Bear get together to read their favorite Bible stories, imagining what it would have been like to see Adam and Eve in the garden, to watch Noah build the ark, and even witness the miraculous birth of Jesus.

Of course, the cubs picture the biblical characters as bears-just like them!

With charming prose and vibrant pictures presented in the traditional Berenstain style, this storybook Bible will capture the hearts of children and reintroduce parents to key Bible stories.

After celebrating their 50th anniversary in 2012, the Berenstain Bears remain a cornerstone of children's literature, providing morals and rich life lessons in more than 300 titles that have sold hundreds of millions of copies around the world.

A family treasure for generations to come, THE BERENSTAIN BEARS STORYBOOK BIBLE continues the Berenstain tradition of inspiring children,providing context and helping them understand important and meaningful stories from the Bible.
****
ABOUT THE AUTHOR: Stan and Jan Berenstain introduced the first Berenstain Bear books in 1962. Mike Berenstain grew up watching his parents write about and draw these lovable bears. Eventually he started drawing and writing about them too. Since the late 80s, he has been very much involved as a writer and illustrator with his family's creation, the Berenstain Bears. He continued to work with his mother, Jan, creating new books, up until her death in 2012. The antics and activities of Mike's three children have provided inspiration for many Berenstain Bears books over the years. Though Stan and Jan passed away in 2005 and 2012, respectively, Mike continues to create the delightful Bear adventures from a studio in Pennsylvania, in an area that looks much like the sunny dirt road deep in Bear Country. www.berenstainbears.com

Posted by Jubilee Reviews at 2:40 PM