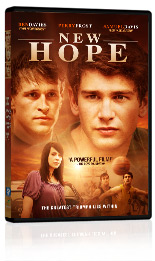 The Evans Family moves to New Hope when Dad gets a pastor job in a new church. Mike is part way through his senior year of High School and is having to change schools so close to graduation. He is not at all happy about the move. Mike joins the basketball team with prodding from his father, and comes into a very tight knit team that doesn't seem to have room for him. The team is still grieving the loss of their star player Chase to suicide over a year ago. I personally thought that was a long time to be mourning like they were, and the film maybe could have taken place 6 months after to make it seem more like the students were still trying to adjust.
The 'students' looked like they would have been in college and because of the acting skills needed and complex issues maybe it should have been set in a college rather than high school in my opinion.

Chase's brother Lucas can't stand Michael and feels he is trying to replace his brother on the team. Lucas sets out immediately to confront Michael and bully him to quit the team, even at the sake of the team.
Lucas is so angry and bitter at his younger brother's loss that he is struggling to move on.
Being the pastor's son holds a stigma of it's own for Michael as he struggles to fit in with people who 'don't need God'.

Michael becomes friends with Jasmine, Chase's girlfriend. This of course adds more fuel to Lucas fire.
Michael struggles to keep his own identity in this new town where he feels so unwanted, and trys to rise above. Major issues for a teen to have to struggle with. Alcohol, suicide, sex, and peer pressure.

Warning:
Jasmine does hand Michael a condom when they are on the rooftop, implying she wants to have sex with him. His mother finds the wrapper in his pants pocket. It isn't explained in the movie what it is, or any kind of sexual scenes, but believe me.. your children will ask "what is that'? Mine thought it was some kind of drugs.. and fortunately we could just sweep it under the rug, but want to warn those who may not want to discuss sex in a basketball movie!

I loved the character of Michael as he struggles to keep his composure and faith in a situation that would try anyone's faith. Serious issues to tackle, and I recommend for ages 15 and up, though the Dove foundation does approve it for 12 and over.

"Directed by Rodney Ray (Flag of My Father, Desires of the Heart), New Hope follows a young man's fight to turn the other cheek, rise above his tormentor, and forgive a hurting soul. A well-crafted film with a strong Christian message, this inspiring drama reminds us that life's troubles may test our faith, but God is watching out for us every step of the way."


On DVD and blue ray from Bridgestone Multimedia Group

I received a copy of this film in exchange for an honest review.