Made in Heaven by Ray Comfort and Jeffrey Seto 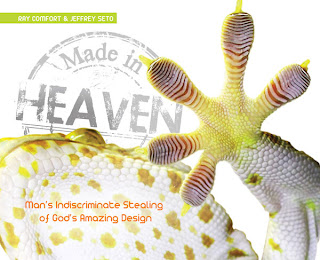 Humans can not create anything!! In reality we only re-create from materials that God made from nothing. We can't make anything from nothing, as God simply spoke the objects into existence.
Humbly we consider all that god created, and how man has mimicked that in our own designs, claiming ownership of the idea. God has provided the ideas from heaven, in our nature, our animals and things he created. Such grand ideas that we take those and re-create them to be useful to human kind. How cool is that?

Ray and Jeffrey look at over 30 inventions and how the concept was first created by God.
It includes detailed comparisons utilizing
-illustrations
-microscopic enlargments
-photos
-historic data
-mathmatical concepts and graphs.

We are able to design a body of armor much like the strength of fish scales, or the arapaima to be exact. It's deluxe, dual layer of scales could very well be the model for medieval chain male designs. Research today is utilizing this same concept to make future armor that is flexible and sturdy.

You may have given some thought to the human eye and how we can capture shots with it, and adhere those to memory. The camera in it's design is much like the human eye, able to take in light and produce a image in memory.

Mosquitos are often thought of a useless and disturbing! Very tenderly withdrawing blood from you without your even being the wiser. Looking at how the mosquito does this through it's serrated like proboscis, penetration force and angle of insertion, is leading Japanese micro engineers to re-create a needle that will be easier for people to use, and with less pain.

God has created a world around us full of fantastic ideas. We have no new ideas, but instead are able to take the ones already designed and utilize them for areas in our own life, to make life just a little bit easier.

I received a copy of this book from New Leaf Press in exchange for an honest review.

Posted by Jubilee Reviews at 5:52 PM