Ghosts of Christmas Past
By J.W. Nicklaus

I think I was somewhere between 6-8 years old at the time. I’m also thinking it was Christmas day (although not certain). We were at my paternal grandparents’ house: two trees in the front yard, a small front porch, and green-painted gravel covering the front yard. It’s hard not to remember something as garish as green gravel.

Our then uncle, Ron, had given my brother and I a set of walkie-talkies as gifts, with batteries even! We couldn’t wait to fling ourselves outside to try them out. I recall Uncle Ron messing with me over the walkie-talkie, but I don’t remember what he said. I think I had rushed into the front yard and my younger brother into the back.

That was state-of-the-art consumer technology back then!

Over the years we were given gifts like skateboards, basketballs, even trainer RC airplanes. Those things used actual gas for their tiny engines. They were fly-by-wire, the purpose being to learn to control take-offs and landings, and the principles of lift and drag while piloting the planes, though tethered, in a circle.

We couldn’t get out the front door fast enough when we got those planes. I remember they didn’t last too long, but I don’t recall why. I can’t remember if we took too many rough landings or what.

I don’t know about where you live. Assuredly every part of this country is different, state to state, region to region, city to city, even probably down to neighborhoods. Another inescapable certainty is that Time has seen me through some decades since childhood. My recollections of Christmas morning are of getting up early to see the swelling of presents beneath the tree and subsequently waiting for the adults to get up and make their coffee. As sweetly anticipated as the ensuing orgy of rip-and-tear was it was over so quickly. As kids you quickly prioritized what got played with first, and it was almost always the items which required outside play. If there weren’t already other kids outside that morning you could be sure that it wouldn’t be long until you were joined by others pursuing the same rush of post-gift ecstacy.

Now, having read all that, think back to this past Christmas morning. If you could see out onto your street, or were out in the morning, how many kids did you see outside living out that same ritual?

I neither heard nor saw any in this neighborhood, and there are a good number of kids around here.

From a sheer nostalgia perspective it seems sad indeed. A quiet street in the waning hours of Christmas morning is a bit unsettling . . . at least to me. And I know I’m not alone. The reason is simple, really: technology.

Kids have all kinds of electronic gadgets now—game consoles, iPods, laptops, new mobile phones, etc. I would bet heavily that Santa delivered plenty of bikes, skateboards, sleds, and other physical activity gifts. I am also aware that many parts of the country are climate-challenged this time of year, thus preventing initial usage of some of those types of gifts.

But not one kid outside?

Are we blithely teaching our children to become anti-social (despite the hyperbole of “social networks”)? Hell, my brother and I loved technology too. We had video games and stereos as well. As we were growing up technology was taking its first infantile steps. We had Atari, Colecovision, and Commodore 64; HBO itself was just beginning to steamroll over our televisions as subscription-based entertainment—ABC, NBC, and CBS still ruled the television airwaves; VCR’s (and Betamax) were soon to follow; 8-tracks had just about died out, the LP was still a staple if you liked music, and cassettes were the new recording and portable music medium.

But we still got out there and lived on Christmas morning.

Even as we become more connected—and less privately so—the more we soundlessly pad to the edge of woeful disconnection with others and lean toward an ambition of indifference and lethargy. 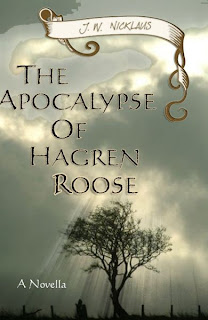 Once a small-town success and happy family man, Hagren Roose finds his slide backwards at once abrupt and wrenching. His small-town mentality sets him on a journey of his own making, of which he has no control—and only he can atone for.

About the Author:
J.W. Nicklaus attests to living somewhere between the city closest to the Sun and upon the precipice of Hell—but the winters are mild in Arizona. An avid reader and peerless amateur philosopher, he is “DNA and energy. I am cellular and soulful. I am shadow and light. I am carbon and water . . . and I am stardust. As are we all.” His singular ambition is simple: to leave the world a slightly better place than when he came into it.

J.W. latest book is the fiction drama novella, The Apocalypse of Hagren Roose.
You can find out more about J.W. at http://avomnia.com/about.html.
Visit him on Facebook at https://www.facebook.com/profile.php?id=1381134300. 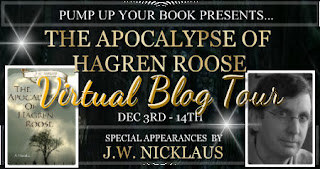