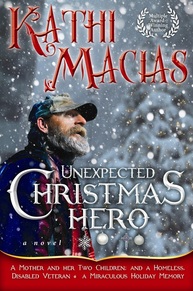 It is so difficult to rate books, even if they are based on the same thing.. Christmas.
Some Christmas stories are feel good ones, that you read in an afternoon and say.. "ah, that was sweet'.
Some are historical in nature and point to the Christ Child.
Others are geared toward children and the make believe of the season.
Then you have ones like the Unexpected Christmas Hero that change your way of thinking, and leave a lasting impact!

Much like Kathi Macias other works, this novel tackles a difficult aspect of American life. In this story we have Josie and her 2 young children. Josie had no way of knowing her husband had run them completely out of money before he drew his last breath on this earth. He left them without home, food, or any source of money. They live on a piddly amount of money, and food stamps, staying at shelter when they can get a bed. Josie sees no way out of her circumstances, as the wait for housing is miles long. The cold WA winter is upon them and Josie fears for her young ones safety.
In one of the shelters they meet Rick, a homeless Vet who is kind to them. Rick is focused on God and deeply longing for his time to go home to the Father. He prefers to not go to a Vet hospital and be doped up his last days, so he continues to live on the streets, often giving up a bed at the shelter so that someone else can have it. Rick, Josie and the kids are helped by one of the shelters workers, who just can't see them staying out in the cold, especially when Josie's little girl is ill.
Josie feeling guilty for taking advantage of people's kindness often moves the kids depite the offer for them to stay.

The focus in this story is not materialistic, not about what to decorate with for the holidays, who to invite for dinner, and how many gifts one must purchase. It is about the simple needs of home, food, and a relationship with Jesus Christ. It is a story about people who love the Lord, reaching out to others despite their differences and having a real love for them.

This story will make you want to change your thoughts from the materialism of the holiday, to the caring and sharing with those less fortunate. It is a beautiful, and touching story!! 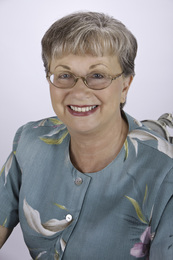 Homelessness is a tough topic for Christmas. What inspired you to use that as the basis for your annual Christmas novel?

I’ve been involved in homeless ministries, to one degree or another, for decades, so I’m not new to this area of ministry. But I’ll admit that I had never considered writing a novel about it until someone in my family, who had personally experienced homelessness at one time in his life, suggested it. The more I thought about it, the more it seemed the perfect theme for a Christmas novel. After all, at Christmas we celebrate the birth of our Savior, who was pretty much homeless at that particular point in time and was born in a stable because there was no room for them at the Bethlehem Motel 6.
Despite having previous ministry and even personal experience with the homeless, were there still some difficult times for you as you researched and wrote this novel?

Absolutely! I always try to climb inside the skin of my characters, and when I thought of myself as the young mother Josie, attempting to care for and protect her two small children while living on the streets, I wept. There were times when my own children were little that we didn’t have a lot of material things and almost never had enough money at the end of the month, but we always had a roof over our heads and never wondered where we would find our next meal. When I consider that approximately 25 percent of the homeless in America are families (either single or dual-parent) with small children, it breaks my heart.

Can you give us a brief synopsis of Unexpected Christmas Hero?

This is a story about a young family—husband, wife, two small children—who seem to be living the American dream. But when the husband dies unexpectedly, the wife (Josie) not only has to deal with that loss but quickly discovers that they are destitute. Her husband had lost his job some months earlier but didn’t want to worry her, so he hid it from her, hoping to find another position. He didn’t, and eventually ran up all their credit cards, took out a second mortgage on the house, emptied their savings, and even cashed in his life insurance policy. It doesn’t take long until Josie and her children lose their home and find themselves living on the streets, depending on the charity of others to survive. Then they meet Rick, a homeless Vietnam vet who takes them under his wing and, in a most surprising and sacrificial way, becomes their unexpected Christmas hero.

Tell us about the “story behind the story,” which involves the man on the front cover.

When the publisher sent the designer out to find someone to pose as Rick, the homeless vet in the book, he spotted a man on the street who looked amazingly like him. He asked the man—whose name is Willard Parker—if he would pose for the book cover. The man readily agreed and then explained that he truly was homeless and hoped having his picture on the cover would somehow help him find his family, particularly his grown daughter. We are doing our best to stay in touch with Mr. Parker and also to spread his story across the Internet and on radio/TV in hopes of fulfilling his dream to be reunited with his family. If anyone looks at the picture on the cover and/or recognizes the man’s name (Willard Parker) and knows the whereabouts of any of his family, we would truly appreciate it if they would contact me at ezyrtr@ca.rr.com so we can take the necessary steps to try and make this reunion happen.

Where can people find your book?

It’s available on any of the main online venues (Amazon, ChristianBooks.com, Barnes & Noble, etc.) and many stores nationwide.

Sure! You can find me at www.kathimacias.com or www.boldfiction.com. I’d love it if people would stop by there and check out all my books, as well as the video trailers that go with them. They can also sign up to receive my weekly devotional, or check out where I’ll be speaking in the near future. Above all, click on “contact” and send me an email. I’d love to hear from them, and I promise to answer.

About the Author: Kathi Macias

Kathi Macias is a multi-award winning writer who has authored nearly 40 books and ghostwritten several others. A former newspaper columnist and string reporter, Kathi has taught creative and business writing in various venues and has been a guest on many radio and television programs. Kathi is a popular speaker at churches, women’s clubs and retreats, and writers’ conferences. She won the prestigious 2008 member of the year award from AWSA (Advanced Writers and Speakers Association) at the annual Golden Scrolls award banquet. Kathi “Easy Writer” Macias lives in Homeland, CA, with her husband, Al.___

I was given a complimentary copy of this book from the author in exchange for posting the author’s interview and/or book review on my blog. CSS Virtual Book Tours are managed by Christian Speakers Services (http://ChristianSpeakersServices.com).

Posted by Jubilee Reviews at 3:34 PM