The Breath of Dawn by Kristen Heitzmann 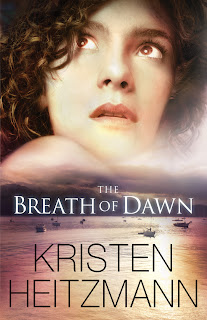 Heitzmann weaves a many-layered tale keep[ing] readers entertained and wondering when the next bit of drama will occur.” –Publishers Weekly

"Corporate turnaround specialist Morgan Spencer, dubbed the “success guru,” has a Midas touch in business. But losing his wife sent him to the brink, and his two-year-old daughter, Livie, is all he’s living for–until they encounter a woman whose trouble just might draw him out of his own.

Four years ago Quinn Reilly did the right thing. Now the man her testimony put in jail is getting out. Though she has put up barriers to protect herself and those around her, she has come to care for the Spencer family, especially the winsome Livie and her mercurial father. Unwilling to put them at risk when the threats begin, she requests something she hopes the super-successful Morgan might be able to deliver.

Fixing problems is what Morgan does best, but his counterproposal takes them in a direction neither is equipped to handle. Determined to confront the past, will they survive to build a future?"

Grief can so overwhelm you that life takes a turn to mere survival. After Morgan loses his beloved in a car accident and is left with an infant to care for, his love for Livie is all that can keep him living.  From the beginning of the book, I was caught up in the story. Kristen Heitzmann is a gifted author who brings intrique and suspence, and at the same time keeping God at the helm.

Kristen Heitzmann is the bestselling author of over a dozen novels, including "Freefall", "Halos", "A Rush of Wings", and the Christy Award winner "Secrets". She and her husband, Jim, and their family live in Colorado Springs, Colorado, where she serves as worship leader in their church. Visit www.kristenheitzmann.com for more.

Posted by Jubilee Reviews at 7:28 AM