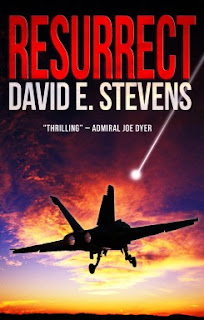 Book 1 in the Resurrect Trilogy.

Preventing his burning fighter from crashing into a neighborhood, Navy Commander Josh Logan ejects ... too late.
Critically injured, he's offered a new life and mission exploit highly classified military technology to stop a global cataclysm. The price? He'll be dead to everyone he knows.
He wakes in a city hospital with a genetically enhanced body and no identity. With the help of his brilliant, Neuro ICU nurse, and guided by nothing but a voice, he must infiltrate the military-industrial complex to develop the world's most powerful weapon ... to protect humanity?
Link to buy the book: http://ow.ly/faaOD

What I love to hear in a great book, is that is is book 1 in a trilogy!! So you know you got in at the beginning and can't wait for the next 2 books.
I read a lot of books that I would say are 'chic lit', geared toward woman really. All of the Amish fiction, relationship novels, etc, although Christian, are not that interesting for guys.
This is one I think my hubby, who isn't much of a reader, would actually enjoy. He does love to read about military technology and plots like this. For me, I had a harder time getting into it. I thought it was intriquing and interesting, but I just don't have a huge interest in military novels. I will get back with you on a review from hubby when he gets a chance to read it. I am fairly certain he will love it! 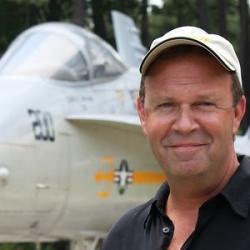 Meet David:
A Navy fighter pilot with hundreds of aircraft carrier landings, Commander David E Stevens holds degrees from Cornell and the University of Michigan with graduate work in astrophysics. He test piloted new fighters and received an aviation patent. With a Top Secret clearance, Dave served as Strike Operations Officer for the Persian Gulf during Desert Storm and led classified defense programs. He's traveled to over two dozen countries.

Find out more about David E. at http://www.resurrecttrilogy.com/
Enter to win a Kindle Fire HERE
I received a copy of this book in exchange for an honest review. All opinions expressed are solely my own.

Posted by Jubilee Reviews at 1:09 PM