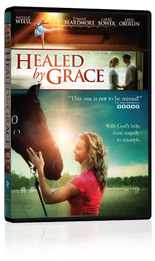 Riley Adams is a sophomore in college and considered by most a 'Bible thumper'. She doesn't stray from her faith in Jesus and isn't afraid to share that in her classes, especially during projects.
Riley is a dancer and hopes to proceed with her career. She is working as a soloist with rival Alea in the Regional Qualifiers. As they are practicing, Aleah pours water on the floor, causing Riley to pull a hamstring.
Riley has prayed for Alea since grade school, and continues to try to reach her for Christ, despite Alea's attempt to sabotage Riley's dance career.

My 13 year old son noticed that Riley was 'slow to anger' during several encounters with Aleah, and that was important for him to note. He was unsure about watching a movie that cover depicted a ballerina and a horse!
The coach encourages Riley that she is dancing for an audience of 1, which for her meant God, not the judge.
A tragic turn of evens delays Riley's training for the Nationals. She suffers severe brain contusions and it is suggested by her doctor that she try equine therapy. There she meets Grace, a beautiful horse, as well as a super handsome physical therapist KC.

Dove approved for all ages.
We really enjoyed this movie. It kept a good pace, and it really showed Christian Character in Riley's life. Despite her losing her biggest dream, she didn't give up on her faith in God.
The only thing we didn't understand was what happened to Riley's mom and why there wasn't a mom in the picture. It would have flowed just as smoothly I think with 2 parents. I have been seeing this trend lately that many shows only have one parent either due to death or divorse. I would like to see more traditional families with both parents. Just my own personal opinon.

Visit Bridgestone Multi Media group for a great selection of family friendly movies this Christmas season!
Be bold and share the Christian message through film.


Disclosure: The reviews and or opinions on this blog are my own opinions. I received the above to review. No monitory compensation was received. I was not required to write a positive review. Your experience may differ. The opinions I have expressed are my own I am disclosing this in accordance with the Federal Trade Commissions 16 CFR Part 255: Guides Concerning the Use of Endorsement and Testimonials in Advertising.

Posted by Jubilee Reviews at 12:00 PM