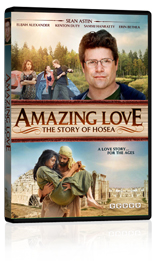 Amazing Love The Story of Hosea. A love story for the ages.

This was an incredible movie with seasoned actors that were very convincing in their roles. We watched it last Saturday night as a family. Dove recommends 12 and over, Hosea was a harlot after all. We allowed all of the children to watch it, and really there wasn't anything we had to explain to them. Hosea is just seen taking gifts and enjoying the finer life when she is away from Hosea.
I love how the story of Hosea was simplified for the viewer. A lot of people read Hosea in the Bible and don't even realize that it is about God's love for his people Israel. That there is a connection on how Hosea continues to love Gomer despite her infidelity and love of idols, just as God continues to love His people.

As Stewart played by Sean Astin tells the youth about the story of Hosea, the scene changes to biblical times and actors rather than just hearing Stewart's retelling. That really made it a great movie in that we get to see the times acted out as Hosea tries to relay God's message to the people of Israel.
I did look up and read Hosea after the movie, to make sure it lined up with scripture, and it did. When Hosea bought back Gomer it was with the amount said in the Bible. I appreciated some of the basic details lining up with scripture. Stewart in the movie even mentions that he has added to the basic story for the teens to have a better visual of what happened in Hosea and how it can apply to them.


God loves us and wants to have a relationship with us, even though we have left and betrayed him.

Hoping to heal the rift, Stuart shares the story of the Old Testament prophet Hosea. Now, it's up to the teens to decide if this powerful example of faith and commitment inspires them to open their hearts in this modern-day example of unconditional love.

Posted by Jubilee Reviews at 11:58 AM