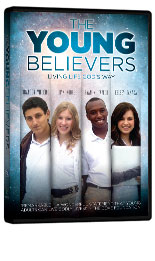 The Young Believers club was started by 4 students as they embarked on their high school career. As 14 year olds heading to high school they made a decision to support each other from abstaining from drugs, sex, drinking, and anything that didn't glorify God.

It continues 4 years later when the foursome is entering their senior year in the private school they attend. It was a bit strange that the same actors are portrayed as 14 year olds and 18 year olds, and in actuality are probably in their 20's. That was a little bit strange for me.

Delilah, Leah, David and Luke are still a strong foursome, who uphold one another with scripture and prayer. They pray together before school and keep each other accountable to the club rules.

Their senior year holds more temptation than they have experienced to date. Delilah gets into a relationship with a boy who is an unbeliever and though her friends try to warn her, she feels she shouldn't have to choose between Jude and God. The boyfriend however is purely interested in getting her to break her abstinence policy!

David struggles with having to be in special classes with his grades so low, along with his parents drinking issues.

Luke is exposed to secular music, despite his desire to sing and record gospel music.

And finally Leah is dealing with her parents separating and pulling back from her friendships and putting up a wall that makes her seem conceited.

The group sticks together, prayers together, and is a great model of the body of Christ caring for one another's needs.

The film has a home made movie type of feel to it. It isn't one that you are going to care to see on the big screen. It is a great fill to show at a youth group, or retreat of teenagers, to spur them on to form relationship bonds like the ones in the film.
I recommend this for older teens are already exposed to some of the trials that face teens today, it isn't really for younger children.

80 minutes in length, you can purchase it from Bridgestone for $12.71
http://www.gobmg.com/product/dvyb/


I received a copy of this film in exchange for an honest review.
Thanks to Bridgestone Multimedia Group for their production of uplifting, moral films.

Posted by Jubilee Reviews at 8:06 PM