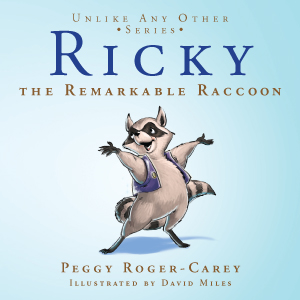 Peggy Roger-Carey
Christian Fiction for All Ages
Print & PDF Copies Available
Ricky just wants to find a family to love him, he is tired of being alone. He sees a boat in the harbor that seems to have a nice looking family aboard. Ricky figures that this family will love him and accept him as their own. He jumps aboard ship, waiting for the right time to introduce himself. When he doers, the family is frightened by him, not accepting. they lock him in a cage to have him removed from the boat. While Ricky in the cage whimpering, Mr. Whiskers comes up and comforts Ricky, offering to help him get out of the cage. Ricky spills his story of not having a family, and his hopes that these humans would be his forever home. Mr. Whiskers mentions his own family wishing to adopt and asks Ricky if he would like to be a part of the Seal family. Ricky isn't sure as he doesn't know how to swim. Mr. Whiskers lets Ricky know he will help him along the way.
Ricky is accepted by the family and they give Ricky his permanent home.

A very nice story of acceptance, and a child's forever family. This will resonate with children who are adopted for sure. Beautiful story of being accepted, just the way you are!


Disclosure: The reviews and or opinions on this blog are my own opinions. I received the above to review. No monitory compensation was received. I was not required to write a positive review. Your experience may differ. The opinions I have expressed are my own I am disclosing this in accordance with the Federal Trade Commissions 16 CFR Part 255: Guides Concerning the Use of Endorsement and Testimonials in Advertising.