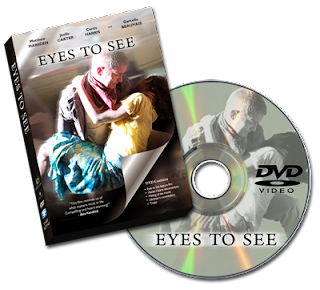 Many of us remember the 2010 Earthquake in Haiti like it happened in our own country. Such devastation that we send troops and volunteers and aid as much as we could possibly get over there. One of the cameramen who was there to cover the story was David De Vos, seeing the aftermath first hand and going for the human interest angle in the story they filmed. Not getting involved, solely being there to get the best shots.

Sometimes God takes our physical vision away, to give us spiritual vision. In Eyes to See, Ray (based on David De Vos) was filming at the epee-center of destruction, getting the shots that would promote his career. A young Haitian boy tries to get Ray's attention, as his mother lay in their home under the rubble. Ray goes, to get pictures of the woman, trapped, with no intention of helping. Her son persisted and Ray enters the very shaky house to try to get her out. In his attempt, he too is trapped. When he is trapped in the ruble, he is unable to see and must rely on Haitian mother, Marie to let him know what is happening.
Without physically being to see with his eyes, Ray can see in his mind's eye, the hurt and loss he has experienced in his own family, by putting his career in the forefront.

This short feature, 33 minutes is very moving and inspirational. The feature is only 33 minutes but there is additional extra features like Haitian Hearts Documentary, Making the Movie, and Directors commentary.

All proceeds from this film go to Hope Outreach International, a non profit organization dedicated to helping Haitians help Haitians.

I received a copy of this film in exchange for an honest review.

You can purchase Eyes to See from Bridgestone Multimedia for $15.26