Divorcing God- Secularism and the Republic 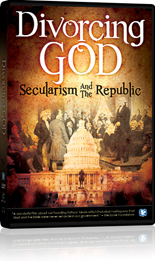 Our country was founded on Christian principles. It was not founded on one specific Christian denomination, but on the basis of the Biblical Christianity. The American republic is in trouble if we do not return to those founding principles.

History proves that no nation can survive if it abandons its morals.

With quotes from notable figures such as Ben Franklin, C.S.Lewis, George Washington, Thomas Jefferson, John Adams and more, we hear again and again our liberties are a gift from God.


There has been a cultural decay through history of nations. The same symptoms are found in each of the nations that have fallen.
1. Huge Government Bureaucracy
2. Disregard for the institution of marriage
3. Ease of attaining a divorse
4. Sexual promiscuity
5.Low birthrate due to abortion and contraceptions

We need to take our faith with us, and not submit to what others tell us we have to think. We have to fight to preserve our founding principles.

This documentary from American Family Studios is roughly 30 minutes in length. Perfect addition to your high school student's government class. The rich history and the various scholars who speak give it relevance today, to act quickly.

I received a copy of this film to better facilitate a fair and accurate review.