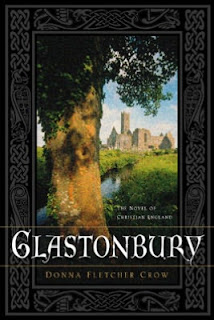 Donna's love of history comes to life in this over 800 page book on the legacy of the Christian faith. Beginning with Joseph of Arimathea from Biblical times and travelling 1500 years to the dissolution of the Glastonbury Abbey in 1539.
There have been many books written on the Glastonbury Abbey and the time of the early Christian church. This novel by Donna Fletcher Crow is indepth, full of visually stimulating words depicting the history of the time, and draws you into the story.
It is a LONG read. Not one of those kind of novels you take to the beach and expect to be finished before you leave. This is the type of book you snuggle in by a warm fire, and transport to the past!
This book is an epic tale, and truly a wonderful work of art!

As the legacy of faith passed from generation to generation, each era of believers found refuge in Glastonbury. In its story you will experience the faith that gave Joseph of Arimathea and his family courage to claim new land for Christ. Relive the persecution of St. George and St. Patrick during their captivity under the Roman Empire. Ride along with King Arthur on his historic adventures and discover the spiritual fortitude that enabled him to become the greatest leader of his time. Witness the rekindling of Christianity with St. Augustine of Canterbury. Be inspired by the faith of the remnant in the midst of the Dark Ages. Watch the upheaval under the rule of Henry VIII that led to the Reformation. And as Christianity triumphs over the darkest moments of its history, you may even find your own spiritual roots.

An epic novel of the history of the faith"

Posted by Jubilee Reviews at 10:36 AM