Son of a Soldier- Aiken Brown 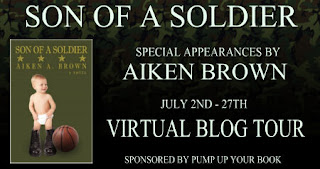 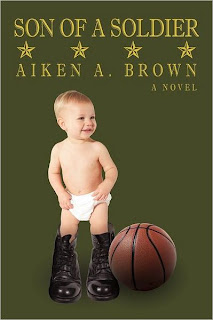 Son of a Soldier is the powerful story of how God used one unlikely, country girl to change the course of history. It seemed impossible to believe that an eighteen-year-old girl from the middle-of-nowhere, Tennessee would have any real significance in the history of our nation…that is until God chose her to make a Godly man out of a flawed, military hero’s stubborn son.
Hailey was a small town, farm girl who had never left her home state of Tennessee. She was a naïve tomboy who possessed an unassuming charm, the power of which she could not comprehend.
Grant was a rebellious Army brat who had seen the world. Glib, sarcastic and self-destructive, he was a loner lost in a world he had never felt he fit into.
They seemingly had little in common, but when two hearts collided, two worlds became one; while Hailey embarks on a beautiful journey of self-discovery in this unique coming-of-age story, Grant travels a winding, dirt road that helps him rediscover a lost innocence and discover a renewed purpose.


This is a long book, I am almost thinking it should have saga or something in the title to show that this book encases basically the entire life of this young man, Grant. It begins with him as a child, an Army brat, too smart for his own good. He thrives with literate adults, not caring for the friendship of children. The tale gunner in the family, without the siblings to grow up with as they were so much older than he. A father who is rigid and uncertain how to relate to Grant. A mother who coddles her 'baby' and overlooks his downfalls.
Constantly on the move, no roots put down, Grant struggles with friendships and relationships.
This book reads much like a TV series I felt. The characters are personable and dynamic. There are several characters as well, but with a book this size it helps keep the flow of the story moving.
The only thing I did not care for was the cover. That typically is not within the authors control unfortunately. But I really don't like this cover. I would not pick up this book based on it. I think it needs like a montage of drawn photos of Grant as he ages, or some soldiers or something. Just my opinion.
This was a great work, it could easily be a great TV series or mini series.

I received a copy of this book from Pump Up Your Book in exchange for an honest review.

Posted by Jubilee Reviews at 2:55 PM