Road to Independence the Movie 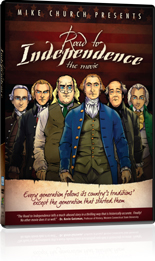 "Director Mike Church presents the triumphant true story of the Declaration of Independence and the men who pledged their lives, their fortunes, and their honor to bring it to life. John Adams, a brash, young lawyer from Boston, has just been appointed to the First Continental Congress. There, he meets Thomas Jefferson, George Washington, Patrick Henry, and more, who, along with Ben Franklin (voiced by Emmy Award winner Jay Thomas), seek to declare their independence, but first, they have to convince their countrymen who oppose the idea nearly as forcefully as the British.

An enlightening look at the courage of our founding fathers, this animated DVD is ideal for the whole family or as supplemental material for a U.S. history lesson. Viewers of all ages are sure to be inspired by this retelling of actual events and the patriots who fought so passionately for the freedoms Americans enjoy today."

Doesn't it seem history is being rewritten even from the time we were in school? True history seems to become more lost over time, especially when it incorporates God as a contributor. It is so refreshing to have movies from Bridgestone Multimedia Group that emphasize the importance of God in our History. Road to Independence is a great DVD, just over 2 hours in length to go along with your early American history home-school curriculum, or supplement to what the kids may be learning in school.  This was an extraordinary time in history with a group of men on a journey that they had no idea would turn out to be so positive. With God at the helm they took to the people to bring us the freedom we experience today. The fore fathers were met with a lack of support from many of the colonists, yet they kept in pursuit. This film is a must for a homeschooling cache of educational films.

The animation wasn't amazing like some of the big top money makers. I think it will still hold the kids attention though and overall make the movie more manageable for the younger set. Any child under 6 to 8 may get a little overwhelmed with the length and history of the film. For elementary and middle school children this film is a definite asset.


I received a copy of this DVD in exchange for an honest review.