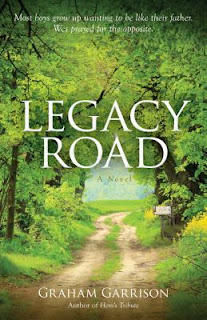 "Wes Watkins's journalism career took off when he was asked to eulogize Michael Gavin, a stranger to Wes but a hometown hero to the humble folks of Talking Creek, Georgia. While researching Gavin's life, Wes was confronted with an estranged relationship of his own that he wasn't prepared to address, having ignored for years the occasional letters from his imprisoned father. Wes has chosen to focus instead on his growing career and his budding relationship with Emmy. His life is looking up . . . until his marriage proposal to Emmy goes south. Left to wonder if he can reconcile with Emmy before she is deployed to Afghanistan, Wes can no longer avoid the other reconciliation that troubles him. But when Wes uncovers a painful truth about his parents' past, patching things up with his father may prove impossible. Wes's life is close to spiraling out of control. Will Wes learn to forgive? Or will the best year of his life turn into the worst?"

I loved this synopsis of the book. I was excited to read it as I hoped it would have some adventure by way of the Civil War letters and tours. I would have liked to seen more done with the letters of Wes's Grandfather and the connection that was found by Wes and his Dad. There were honestly too many plots going on at once. Too many great stories, but put together in one fairly short book at 215 pages. I would have liked to see more depth in a couple of the themes, rather than being more shallow and broad in topic.

The gist of the book was forgiveness. Everyone of the characters had someone they needed to forgive, including themselves. As they worked through that and each one realized the forgiveness needed it was nice to see their growth. It was hard to bond with the characters in such a short amount of time though.

I would love to have seen this book be about twice the size, a little more in depth and utilizing the civil war memorabilia a bit more.

Posted by Jubilee Reviews at 12:00 PM