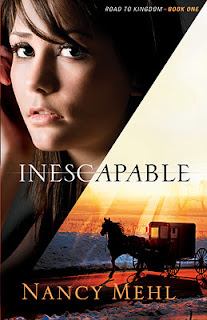 Some of my readers may have remembered that I had recently moved near a Mennonite community with several of my neighbors being of the Mennonite faith. As I get to know them more I am intrigued by Christian fiction and how it portray the Mennonites. There is a lot of Amish fiction available but not as much in the way of Mennonite.
This book started out with more of an old order faith, still with the horses and buggies, remote from the world and kind of isolated. I started out kind of disappointed as I read about these people who were secluded and not interested in anything about the world, because that is not how the people I know are like. But hang in there, that was the way it was for a season and the group had begun to get enlightened to the truth more and more, rather than the rules. Lizzie had grown up in that secluded town of Kingdom and got out as soon as she could, living with a harsh, rule driven father had been too much when she found herself pregnant and unwed.

Lizzie has been gone for 5 years, working on her own and raising her young daughter Charity. Her job is suddenly in jeopardy as she is wrongfully accused of stealing money. In addition she has been sent threatening notes and sees she is being followed. The only place she knows to go is back to Kingdom, taking the risk that her Father has changed.

Still harsh and 'uncaring' Lizzie's father is no longer an elder in the church. The church is seeking to grow and change and reach more people, getting rid of some of the strict rules that Lizzie's Father helped to put in place. This displacement has made him more resentful and he refuses to allow Lizzie or Charity into his home.

The town is still full of loving and caring people and Lizzie tends the local restraunt in exchange for lodging for her and her daughter.
This book is really good as the reader is able to see the faith of different people in the community. Watching them grow and understand more clearly God's plan in His word. The characters are well developed and interesting! Suspenseful as we try to figure out who is following Lizzie and why! Excited that this wasn't the end of the story, but Book 1 in the Road to Kingdom series!!